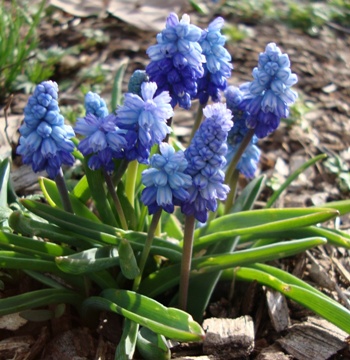 Catalogs call them "minor bulbs"--those little gems that brighten up our gardens in late winter. I am frankly astounded that you see so few of these in Denver gardens (or anywhere in the Rocky Mountain region). For any number of geobotanical reasons, there are only a very small number of early spring ephemerals in our native flora. But the Mediterranean region and Central Asia teem with extraordinary flowers that bloom  as snows melt. These seem to grow here with real gusto. Crocuses, snowdrops, Cyclamen coum and reticulate irises are all winter's jewels or else spring's earliest heralds. And there are many more as well, but the tiny grape hyacinth, Muscari azureum, holds a special place in my affections.

Mention grape hyacinth, and many gardeners groan: the commonly grown Muscari armeniacum or M. neglectum thrive here all right: they can be downright pesky in the garden, producing vast sheaths of messy foliage in fall that singes by spring and doesn't quite justify their gloomy purple blue clusters that come a little too late  (when everything else is blooming too).

There are a number of equally prolific grape hyacinths with more winning traits, and the first of these is this tiny blue marvel that usually opens its first blossoms at ground level in February. March, however, is its time of glory: right now the dry borders in my garden have wide swaths of azure blue, like the little pool of color you can see below.

It is prolific, but please don't summon the invasive police!  In this case, one can never seem to have enough of this good thing. It sprinkles my borders, my rock garden, it seems to pop up somewhere new every year. Of course, I have been known to gather its seeds in May and scatter them around rather enthusiastically. This little gem is above ground only a few weeks, and at the time of year our gardens are their most austere and need that little extra kick. And tiny though it is, its piercing blue is welcome. I first came to know this plant in the garden of the late T. Paul Maslin, an eminent biologist who taught at the University of Colorado in Boulder. Paul passed away in 1984. He was my near neighbor growing up with the most beautiful garden in Boulder (maybe in the state). He became my mentor and best friend. He loved this bulb (then known as Hyacinthus azureus) which grew everywhere in his garden too. In fact, my plants trace their origins to Paul. In the later 20th century, Botanists called this bulb Hyacinthella azurea, so the Latin specific epithet has progressed from masculine to feminine and is now neuter!  No matter what it's name or sex may be, this is a bulb I wouldn't want to live without. Every day in March I go out and admire it here and there, and think of the vast swaths of Anatolia that it graces in nature (where, no doubt, some of my ancestors a millenium ago admired it too), and of my wonderful friend, Paul. I look forward to the day it carpets much of my half acre with azure scatterugs of sparkling blue. One could have much worse predilections, I'm sure you would agree!