Will the real Pampas Grass please stand up? 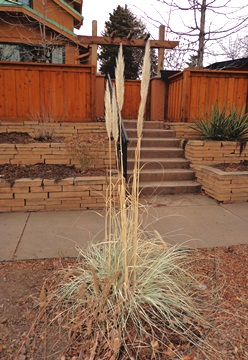 Yes, Virginia...pampas grass (Cortaderia selloana) does indeed grow in Denver...although not in great numbers. Observant visitors will have noticed them dotted here and there at the York Street gardens, and I have seen another half dozen driving around Denver. The one above is right next to University Avenue, and constitutes a minor traffic hazard as grass-afficionados notice it and swerve! I suspect the owners purchased it via mail order, since these are rarely sold locally ("pampas grass is not hardy" according to most pretty well-informed nursery folk. And I agree, most are not. Only the dwarf, high elevation forms are apt to be hardy here, and these are hard to find). Most Coloradoans probably don't know that pampas grass is a pestiferous weed in California--but then one man's weed is another man's treasure. I doubt that this will ever pose much of a threat in our climate. I share this picture to show that much of the creative work of plant experimentation is undertaken by home gardeners. We at the Gardens sometimes have to run to keep up!

Here you can see from closer up the silky, silvery color that true pampas grass has seemed to perfect. If you have driven parts of Texas you are sure to have admired pampas grass--a popular landscape plant in that state. I used to drive down at Thanksgiving each year, and the clumps of pampas here and there along the way were like mile posts, or sentinels that cheered the trip. Their fluffy seedheads are amazing when they puff up. Alas! A well established clump is so massive that cutting it back each year is a chore. This is one of the hazards of growing large grasses anywhere. 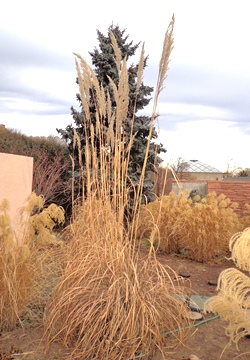 Confusingly called "hardy pampas grass" (a paradox if you think about it...), this is the most commonly planted giant grass around Denver. I am sure half the people who grow it think it is pampas grass, and if you look up and compare, you will see there is a family resemblance. But while the TRUE pampas grass comes from South America as the name suggests, Ravenna Grass is from the Mediterranean. This still grows abundantly in the coastal marshes near Ravenna I've been told. This is by far the most vigorous and giant of commonly grown grasses, and a large clump will often produce vigorous seedlings nearby that should be dug while young. A large clump needs a front end loader to move or remove...be warned! Until recently it was classed as an Erianthus, but has been put in the same genus as sugar cane in the last decade or so (Saccharum). Sugar cane has helped make Brazil energy self reliant. Maybe this vigorous grass has biomass potential? The group that has been exploited most for that in America is another genus altogether, however... 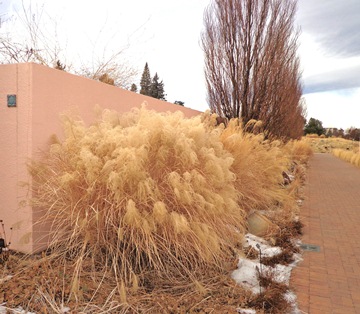 There are hundreds of cultivars selected from the various species of Miscanthus--which is also often sold as hardy pampas grass. They are hardy enough but the name is taken, I'm sorry. A great deal of research is being done on these because of their famous C4 metabolism which allows them to accrue enormous biomass in short periods of time. Miscanthus have nevertheless been practically banned in much of the eastern U.S. due to their propensity to produce colossal seed crops. I have yet to see a seedling appear in Denver outside, so I think we can grow these without guilt--except that these are the most water demanding of these larger grasses. Don't try them in your Xeriscape! 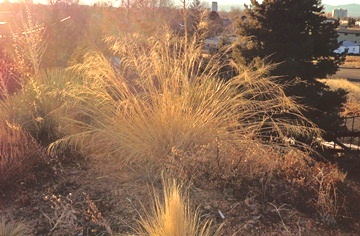 My current favorite giant grass is native not far from us here in the Rio Grande Valley. Plant Select has chosen to feature this plant in 2006 and I can vouch for its toughness. The plant you see in the picture is in my garden, on very sandy soil where it bakes for months on end and gets precious little water. Even so, it makes a fabulous fountain of golden seedheads that persist through the winter months. Indeed, all of these pictures were taken this morning, January 24. The greatest reason to grow these pampas grasses (and their pretenders too!) is that they provide drama, beauty, movement and interest in the depths of winter for months on end. If you grow them, please resist cutting them back until February so we can enjoy their splendid display! But do cut them back hard so that the new growth will be fresh and green for the coming year!

What would be the best grass or bamboo to pot for privacy on deck?
Partially shade and sun; would need it to reach about 6 ft tall and be in a pot.
Southwest exposure with an evergreen shading deck for a few hours in afternoon.
Thank you.

Contact Colorado Master Gardeners at gardeninghelp@botanicgardens.org. They can answer any plant-related questions and offer ornamental or cultivated plant identification. Following directives from CSU to protect the health of the public and our volunteers, Colorado Master Gardeners are only answering questions submitted by email for the time being.

What is the best ornamental grass to plant in Denver near a fence for some privacy. Need 6-8 foot low maintenance grass. Direct sun

Contact Colorado Master Gardeners at gardeninghelp@botanicgardens.org. They can answer any plant-related questions and offer ornamental or cultivated plant identification. Following directives from CSU to protect the health of the public and our volunteers, Colorado Master Gardeners are only answering questions submitted by email for the time being.

Hello! We just bought a house in the fall that has some huge (and gorgeous!) pampas grass plants along our driveway. They are super full and flowed and swayed all winter. However now that spring is upon us, should we be pruning the tan and colorless spikes? Or do we leave it alone for the new growth to push out the old? If we are to prune, how and when?
For any needed reference - these plants are a nice 9-10 ft tall. The base is pretty thick and it’s impossible to know if they were pruned last spring. Thanks!

Hi Tracie, here is a suggestion from Panayoti Kelaidis:

I suspect your "pampas grass" may actually be Ravenna Grass (there are many thousands of the latter masquerading for every one of the true, South American Pampas Grass in Denver). But whichever you have, now is a great time to cut them back. I'd cut both stem and foliage back as far as new growth if you can. I warn you, wear sturdy gloves and long sleeves and possibly even goggles: the edges of all these tall grasses can be razor sharp, and make sure your pruning tools are sharp! If you leave the old stems and leaves, they look messy to most people's eyes through the summer season.

We cannot view the answer to a question that was asked previously. Looking for an ornamental grass for privacy, 6 to 8 feet tall, that can stand direct sun.
Thanks!

Contact Colorado Master Gardeners at gardeninghelp@botanicgardens.org. They can answer any plant-related questions and offer ornamental or cultivated plant recommendations.

In this article, Panayoti notes that "My current favorite giant grass is native not far from us here in the Rio Grande Valley." Any idea what specific grass variety is being referred to? Great read, this article has a long shelf life!

Panayoti says: Sorry that our Rio Grande grass (Giant Sacaton, Sporobolus wrightii) wasn’t labeled in the last image. This has proved to be a tough, long lived and non-invasive alternative to true Pampas Grass. It is showing up all over Denver and has been promoted by Plant Select—so you can find it at the better garden centers in our region and beyond. Once established it doesn’t even need supplemental irrigation in our climate to survive.