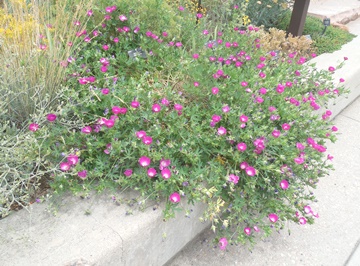 Strolling around York Street gardens this time of year, you are apt to see a bright rose red plant that resembles a geranium in many gardens. It is apt to be winecups (Callirhoe involucrata), a favorite of many staff and keen gardeners in the area. Not a geranium at all, this is in the Mallow family, and another common name is "Poppy Mallow", although it's no more a poppy than it is a geranium. It is a native plant found sparingly on the Great Plains east of Denver, more commonly in the Midwestern prairies. It is a stellar garden plant that will survive with no supplemental irrigation once established...I see it occasionally as I drive around Denver--but not nearly enough! 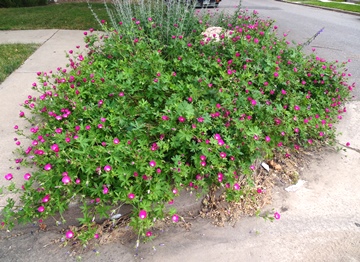 Here is an amazing planting I found yesterday in Highlands neighborhood--easily ten feet across, completely filling one of those triangular hellstrip corners that are so often weed infested and neglected-looking (making neighborhoods look like slums). Here is a great alternative--a rock, a bit of Russian sage (Perovskia) and an exuberant mass of winecups blooming for months on end--all with no supplemental water! 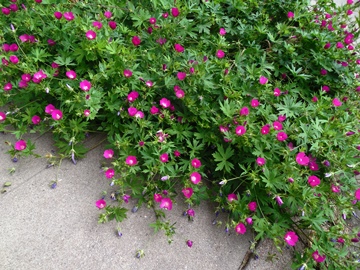 This mass is growing in part shade--and the mound is almost two feet tallk, as opposed to the first picture in this series taken at Denver Botanic Gardens, in full sun--well less than a foot tall. It does need some room to ramble--but almost everyone has a spot where this can flourish. 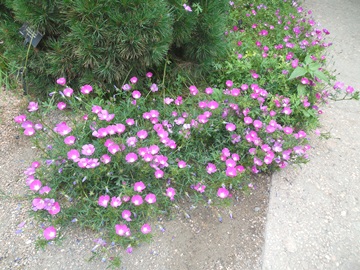 Callirhoe involucrata v. tenuissima Not everyone likes the hot magenta of the typical form of this species: there is a lighter, more pink form of winecups that is found originally in Mexico--sometimes classed as var. tenuissima. It does have even more finely divided foliage and a neater habit and the flowers often have a striking white eye--here seen growing in the Rock Alpine Garden as it transitions to the Gates Garden in the west. I am especially fond of this form, first introduced to cultivation by Yucca-do a few decades ago. 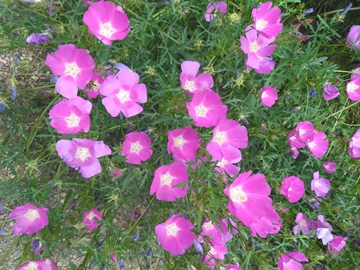 You can see if you compare this with the next that var. tenuissima is quite different in effect. Come to think of it, I think I need both in my garden! And I wish we'd see it a lot more everywhere in town: one of the toughest and most beautiful native perennials! 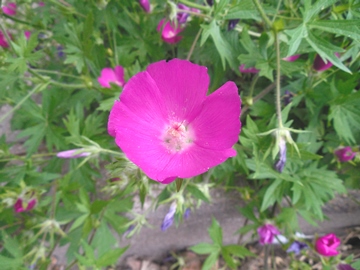 Here is a closeup of the typical form for comparison with the one above--both are really stunning! For sale in better Garden Centers (forget the Box Stores when it comes to native plants)..can be planted any time--just make sure it doesn't dry out in the height of the summer until established!