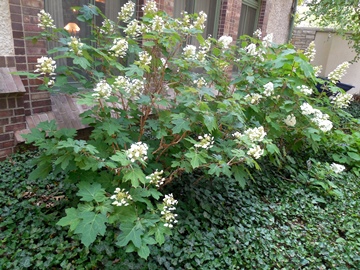 This time of year I am amazed to see spectacular mounds of Hydrangea 'Annabelle' glowing around the metro area. That is one cultivar that has certainly made its mark, although one doesn't see quite as many of them as you would in a more humid part of the country. I've noticed a few other sorts here and there--including small plants of the blue species (I think the jury is still out on these when it comes to our climate however.). There is one particularly striking hydrangea that has really proven its mettle for many, many years at Denver Botanic Gardens. The Oakleaf Hydrangea (according to the USDA) is restricted to just the eight southeastern-most states, and yet the plants shown above have persisted in a dense stand of English Ivy alongside Denver Botanic Gardens' Waring House for nearly 30 years. 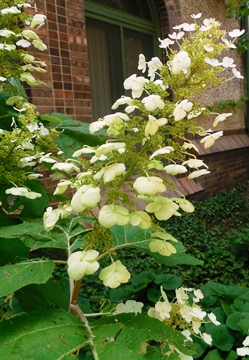 Blossoms of the typical wild form

The common wild form has long, graceful flowers that form a bit of a cone shape up to a foot long. Like others in the genus, the fresh flowers are white, but age a lovely soft green. If you cut them and hang them in a cool dry spot, they can make wonderful dry flowers for the winter too! 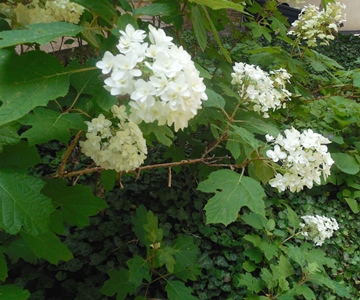 Growing alongside the typical form is a more compact flowered and smaller leaved cultivar that looks a bit more like the Eurasian species. It seems to have fared just as well over the decades, and makes for a nice contrast. All forms of this wonderful shrub turn glorious orange and pink in the fall, reminiscent of their native cousin Jamesia americana, that grows everywhere in our mountains (the only member of the family that does).

Here you can see both cultivars growing alongside one another more clearly. Surely, if they can grow well in this most challenging spot, nearly swamped with thirsty ivy, imagine what it might do in a well prepared spot in your garden with some compost and TLC? We have another handful of cultivars of this wonderful plant elsewhere on our grounds--but not enough! Come to think of it, I have a perfect spot in my garden for one... I better go out and get it before you beat me to the punch!

Given that Hydrangeas are not a great CO plant, what would you suggest as a substitute for color/size in this climate?

I think a few Hydrangeas

I think a few Hydrangeas (mostly the ones I mentioned) are actually very good plants for the right spot in Colorado. The famous blue species (H. macrophylla) really needs a humid, wet environment and acid soils to perform its best. That said, I've seen some stellar plantings of the cultivar 'Endless Summer' in older parts of Denver (with probably more acid soil due to leaching over time). I would generally recommend most of the many kinds of Viburnum you can find locally over Hydrangeas (except for the ones I mentioned). Viburnums are less sensitive to soil alkalinity and can take it a tad drier. If your garden is truly baking hot, and your soil very alkaline, I'd stick to natives (and learn to underwater--they generally hate being wet!). Hope this helps.

Love to plant a purple or blue hydrangeas, but I am not sure what types can grow in Colorado Springs zone 5b? Any suggestion.

Please notify me what type of Hydrangeas can grow in Colorado Highlands Ranch.

Like I mentioned above, you can reach out directly to Colorado Master Gardeners and they should be able to help you. Happy gardening!

what kind, if any, hydrangeas can I grow in Aurora

Hi Susan, great question! Check with our Master Gardeners--they should be able to help guide you about the right hydrangeas to plant in Aurora. Contact Colorado Master Gardeners at gardeninghelp@botanicgardens.org.