Annus Mirabilis: a toast from a claret cup! 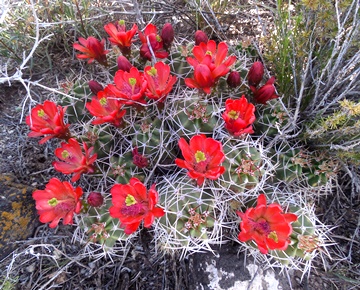 Earlier this year, the Colorado Legislature passed a bill designating Echinocereus triglochidiatus the official state cactus of Colorado. I'm one of those people who'd find it hard to settle on a single taxon as a favorite--especially in such a splendiferous and exquisite group as our native cacti...although we fellows (or at least those of us who aren't color blind) are known to love bright red flowers. And few flowers are as outrageously, emphaticalloy red as the claret cups. Of course, "claret cup" covers a number of species--and Colorado has at least four distinct taxa grouped under at least two specific epithets. Most of these are blooming right now at lower elevations throughout the state.

Last weekend three staff from Denver Botanic Gardens took a whirlwind trip to the San Luis valley to explore a unique habitat that contains some strange, and possibly novel taxa. The next morning we began our trek homeward, but took a side trip through a corner of the San Luis hills, a little studied corner of the state comprised of volcanic rock. As soon as we got out of the vehicle we were greeted with the bright red beacons of these amazing flowers. 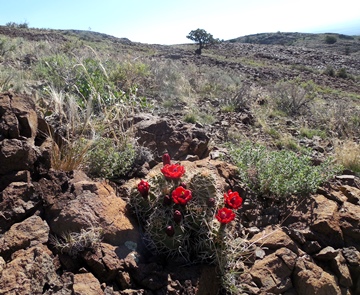 This form has traditionally been considered a race of Echinocereus triglochidiatus, the classic "claret cup", although some botanists have classed it as its own species: E. gonacanthus because of its robust stems and coarse spines. Certain plants are so photogenic that no matter how many pictures you already have, you invariably take more! Such is the case with claret cups--I must have dozens of perfectly good pictures already, but who could resist these prickly mounds studded with such Christmassy red flowers? And the tufted, silvery artemisias that grow with them make such a wonderful setting, as do the thickly lichened stones. 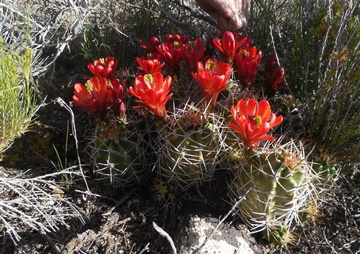 On such an intensely sunny day, you have to use every trick in the book to try and capture these gorgeous plants in their awe-inspiring setting. 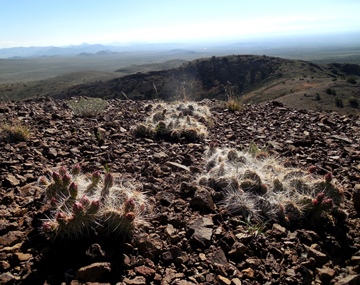 Hunger cactus on the ridge

Claret cups were not the only cactus here--we found several other species, including this spectacular prickly pear that grew on the most windswept sites. It was heavily budded. I imagine by mid-week this will be a blaze of color!

And even more Hunger cactus

This picture better shows how thickly these grew. They undoubtedly would key out to be Opuntia polyacantha--the commonest prickly pear in the state--although I find it is extremely polymorphic in its habit. I loved these high alitude specimens with such long, white spines! 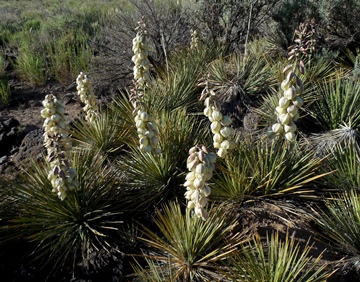 The third remarkable succulent that abounded in these hills was a miniature yucca in peak bloom. The foliage was only a foot or less in length, and the flower stalks were under two feet tall. This formed incredibly dense colonies that must be impenetrable which we observed on the steep east facing slope of the mountain--really quite different from Yucca glauca around Denver. 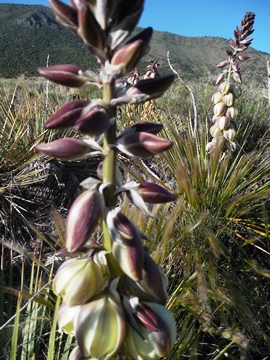 Some of the yuccas had quite dark reddish coloration on the back of their tepals--a wonderful trait to possess in a garden plant. And I know at least one local nurseryman who is propagating this very strain. 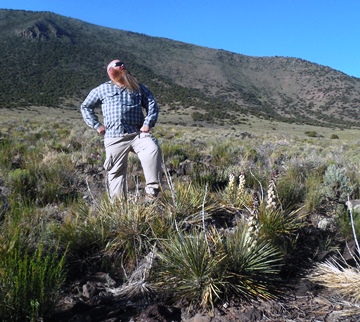 Ooops! Sorry--that's not Cuchulain! But his avatar on our staff, Mike Bone, curator of steppe collections and master propagator! 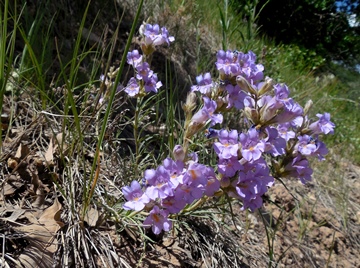 A few hours later, as we headed towards the Wet Mountain valley, we saw wonderful displays of wildflowers including this bright penstemon that is almost restricted to Southeastern Colorado prairies.

The Research Department, who organized this trip, have to take advantage of the summer months of growing season to do their work monitoring and studying our native flora. We were lucky to join them on this productive jaunt. This year promises to be an "Year of wonders", and I have borrowed two verses from Dryden's "Annus Mirabilis" that resonate:

"In this deep quiet, from what source unknown

Those seeds of fire their fatal birth disclose"