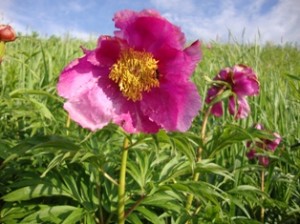 Kazakhstan was as cool and rainy as we had been in Colorado last June: a different year we would likely have missed the last peonies, which we caught at their very peak. The picture above was taken in the Kalbinsky Hills, a low range (largely treeless) in the Altai mountains between Ust Kamenogorsk and Katom Karagai--the first being the largest city in the Kazakh Altai region, and the other the largest town in the Altai uplands.  Our driver screeched to a halt when we all called out at the first red flash: the flowers really are like flags out there--some of them surely 6" across. The foliage seemed to be more deeply cut than the Paeonia anomala at the gardens, although much coarser than the threadleaf, or fernleaf peony of the West Asian steppe (Paeonia tenuifolia). Over the next ten days we saw this peony everywhere, at higher and higher altitudes. The picture below was taken not far below treeline on Burkhat Pass, above the spa called Rakhmanovsky Springs. 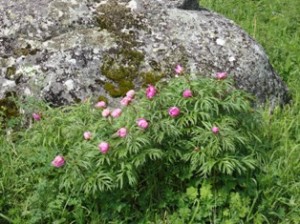 What this picture doesn't really convey is how massive this clump is: easily four feet across and almost a yard tall: much bigger than any Paeonia anomala I have seen in cultivation. I suspect the Altai race may not be in cultivation.

Here and there at the lower elevations we found a much tinier peony with distinctive calyces that had long since finished blooming. This is Paeonia hybrida, a species that may not be in cultivation. We only found a few with faded flowers remaining: in the picture it look similar to anomala, but don't be fooled. This is a very different plant, which fortunately bore great quantities of ripe seed. Ah! the joys of plant exploration. They warm heart in winter, even though in fact they can be exhausting and frustrating at the time. 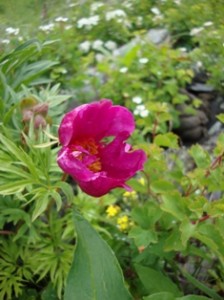