In mid-February a group of Denver Botanic Gardens supporters and I began an exciting journey to Peru, spending time in each of the three major climate zones – the coastal desert, mountainous Andes highlands, and the rainforest of eastern Peru.  Over the next several weeks, I will present highlights from this trip, sponsored by Denver Botanic Gardens and Reefs to Rockies Travel. 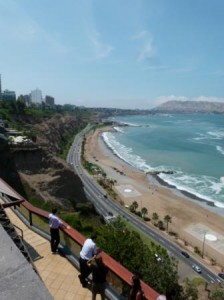 We begin our adventure in Peru’s capital city, Lima.  Located on the Pacific coast in a coastal desert climate, Lima is a large city of nearly 9 million people (almost one third of Peru’s total population).  I was impressed with the cleanliness of the city and the many beautiful parks and boulevards throughout the area.  Our first scheduled activity was a visit to the Larco Herrera Museum – a wonderful museum dedicated to Pre-Columbian Peru.  Exhibits are arranged chronologically and include hundreds of artifacts, some over 3000 years old. 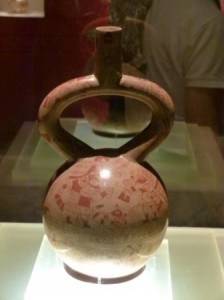 The ceramics were particularly interesting, especially the many beautiful examples of Whistling Vessels (Ceramic jars with two openings - when water is poured from one opening, air rushes in the other and creates a whistling sound.).  Ulla, our enthusiastic and passionate tour guide, did an incredible job of describing the significance of the shape of and decorations on all the various jars. Textiles were also well represented.  An important advancement in textiles came with the full domestication of cotton around 1000 BC.  Cotton provided stronger fishing nets and therefore a more reliable source and amount of food.  Hunters and gatherers were gradually replaced with fishermen - allowing the development of the first commercial centers along Peru’s coast. The museum also has many beautiful examples of ceremonial textiles.  I particularly admired a brightly colored blue and gold “standard” or flag that was found buried in a clay jar in a dessert in southern Peru.  It is believed to date from between 800 and 1300 AD.  It was only upon closer examination that I saw how the colors were created - each block of color was made up of thousands of small blue or gold macaw feathers. 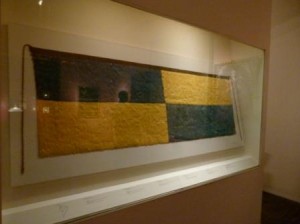 After far too short a stay, we loaded onto our bus and headed off to see the Barbosa-Stern art collection.  We were given a tour of this private collection of Viceregal art by Sylvia Stern and her son, Aldo Barbosa.  The tour was very enlightening, showing how early European settlers (mostly Spanish) influenced art in the region.  Especially interesting was the use of art by the Catholic Church to persuade the Inca to convert  to Catholicism.  Our hosts helped interpret the symbolism in the paintings (many on copper or tin “canvases”) and explained how images were adapted from European standards to be more relevant to the Inca culture.  For example, instead of the camels you might see in a European painting, the early religious paintings in South America might have shown a llama or alpaca.  Angel wings often had bright colors – suggesting condor or parrot feathers rather than wings of a dove.  Perhaps one of the most famous examples of this regional adaptation is a painting by Marcos Zapata in the cathedral in Cusco.  This rendition of The Last Supper shows Jesus and his disciples dining on Cuy (Guinea Pig) and partaking in a glass of Chicha – a local “beer”.  We finished our day in Lima with dinner at Casa Aliaga – the oldest colonial mansion in Lima.  The home was built on land given to the Aliaga family by Franzisco Pizarro in 1535 and has been inhabited by descendents of the Aliaga family ever since.  We enjoyed a short presentation on Andean flora and then a wonderful meal including lucama custard drizzled with chocolate – a favorite local dessert. After an exhausting day, we returned to our hotel to prepare for an early flight  the next morning.  I don’t think any of us had trouble sleeping – except for the short interruption by a 4.2 earthquake!