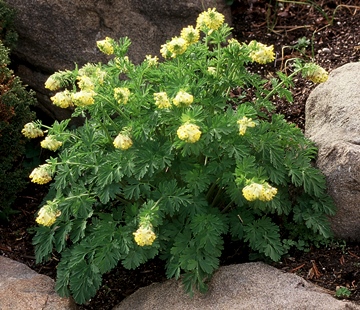 Fumewort may happen to be the accepted common name, but most of us prefer to call them by their Latin name: Corydalis. Some put the accent on the antipenult, others on the penult: either way--real gardeners will understand! These plants are hot right now. Dozens are available from specialist nurseries, often at exhoribtant prices. One of the showiest of the bunch, however, has a long history of growing at Denver Botanic Gardens, where several are blooming now. Here is a picture of one in the glory days--they're more modest in size lately! 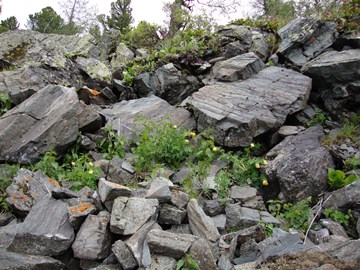 Corydalis nobilis in the wild

One of the many high points of a trip I took with Mike Bone five years ago to Kazakhstan at the behest of Plant Select was finally finding this familiar plant in the wild! Although we covered many miles in the Altai mountains both in Kazakhstan and Mongolia, we only found this one patch of the Corydalis growing on a north facing talus slope not far south of the Austrian Road summit.

Here is that colony a little closer up. 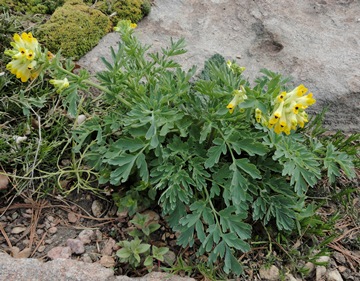 And here you can get a better picture of a whole plant up close. There is something unique about the bearing of this plant . . . the graceful bluish fernlike tuft of leaves, and those clusters of bright yellow flowers with the darker spot in the center! People find this irresistible--whenever they find one at the Gardens they always comment on it. 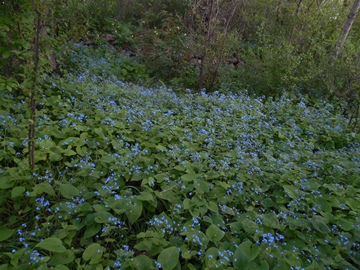 You can imagine my surprise when Tom Van Zandt, a member of the Gardens in Boulder, called me to tell me that his neighbor had dozens of Corydalis nobilis naturalized in his garden! THIS I had to see...I drove up to Boulder yesterday, and was a little taken aback to visit the old Rockmount Nursery site I knew well as a child growing up in Boulder, chockablock full of Siberian forget-me-not (Brunnera macrophylla). This last undeveloped corner of this famous nursery was purchased from Darwin Andrews, and the current resident has maintaned the site--removing weeds and allowing the plants there to coast on, entirely on whatever moisture comes out of the sky. There are some famous trees--state champions--growing here that I've visited in the summer: a giant Post Oak (Quercus stellata) and an even more imposing Shingle Oak (Quercus imbricaria). But I didn't expect to see literally millions of Siberian squill (Scilla sibirica) which unfortunately had just passed over bloom. And large Peking lilacs (Syringa reticulata) and many other exotics that had persisted with little care and no water for decades. Did I mention there were masses of Colchicums in leaf--likewise naturalized, and several husky clumps of herbaceous clematis (Clematis integrifolia) in the grassy opening between the woods.  By the way, if you look in the back of this picture you will see some pale yellow glimmerings... 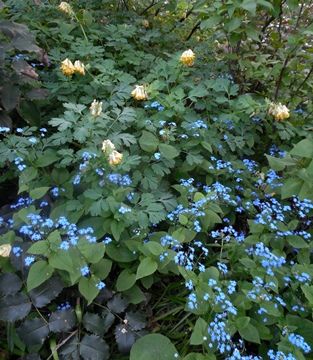 Yes! Here is the first Corydalis nobilis, in gorgeous combination with the forget-me-not: a combo any designer would pride themselves on! 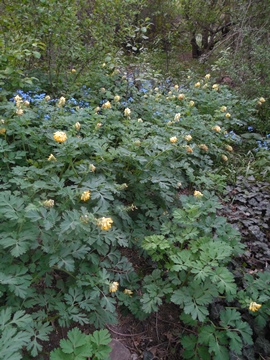 Everywhere I looked there were masses of Corydalis, growing with amazing vigor!

The site was a rocky slope, not unlike where I'd seen them five years ago in Kazakhstan, albeit nearly two months earlier in the year. 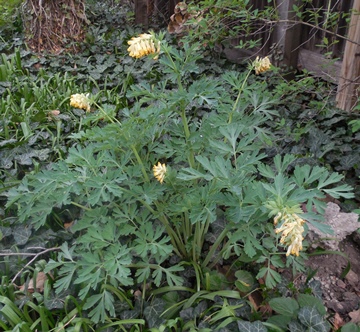 The owner of the home has approved of our obtaining seed from these colonies. It's highly unlikely you will find this corydalis at our plant sale this year, or anywhere mail order I know about for that matter. But we shall make an effort to grow as many as possible. I can't wait to re-create this combination of corydalis and forget-me-not at my home!

Notice the corydalis in this last picture is coming up through English Ivy, likewise naturalized here! Boulder does get a few more inches of precipitation than any other city in the state below 6000'--although Boulder has had its share of drought years. Seeing all these plants persisting in cultivation after decades of benign neglect brings up the spectre of "invasiveness." I suppose the Brunnera is growing so widely and thickly one would be cautious about planting this? I have grown Brunnera many times--and it will indeed produce lots of seedlings in the garden, which I find pretty easy to remove. I think it's a question of finding a spot where you don't mind having them spread. There were many dozens of Corydalis throughout the woods, it's true, but they have probably been growing at that site for half a century at least--probably more like a century. This is growing in dozens of garden I know of in the Front Range, and I have never heard anyone complain about its producing too many seedlings (there are always takers!).

What this really brings up for me is a major solution to the perennial question: "What do I grow in dry shade?": This is probably the most frequently asked question I've had over the decades. I can now respond enthusiastically: plant Siberian squill, Colchicums, siberian forget-me-not and Corydalis nobilis! And it is very possible that in a hundred years, you will have botanic gardeners like me marvelling at your low maintenance, xeric garden! Thank you, Tom, for showing me one of the great horticultural wonders of Colorado!