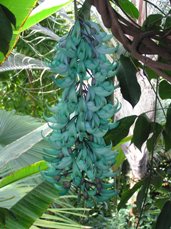 The jade vine is in full bloom! There are two long, hanging columns of flowers right now, with a few more to go.  Green flowers have the reputation of being subtle, but this is really wild!  I was up on the mezzanine, and a cluster of garden visitors was exclaiming over it.  We agreed that describing them as "green just doesn't really cover it."Since my previous post quoting Nick Snakenberg, the gardens has recorded him in an audio tour.  Call 720-548-3474 and press 89# to hear Nick for yourself.  (The Gardens does not charge callers to listen.) It is really a tribute to the Conservatory team's perserverence that we have a blooming Strongylodon macrobotrys to show Denver.