Bulbs: More Scandalous Than You Think 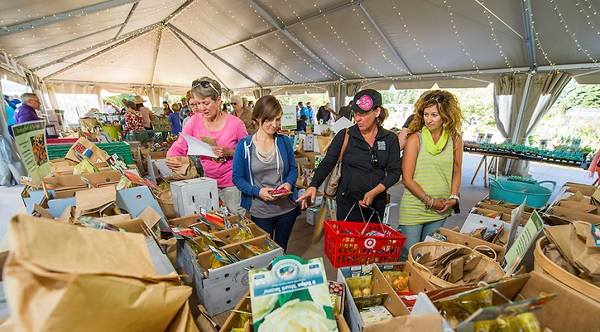 This weekend, gardeners will flock to our annual Fall Plant & Bulb Sale, where scores of spring-blooming bulbs and hardy fall plants will be available for purchase and our horticulturists will offer expert advice on how to grow them. Free admission to the Plant Sale and to the Gardens.

This year, you can also sit in on a free lecture by Mike Smedley, a bulbs enthusiast who grows over 10,000 bulbs in his home garden in Durango, CO. A humor columnist for his local paper, Mike has more juicy stories about bulbs than we even knew existed. We asked him to share a few interesting tidbits as a little sneak peek before his lectures this weekend, and here’s what he had to say.

What are the differences between a bulb, a rhizome, a tuber and a corm?

The term “bulb” lumps together “geophytes,” or things that grow in the ground and have stored energy that will be used for next season’s growth. Bulbs are the “Happy Meals” of horticulture because everything is right there ready to go: all you need to do is plant them! That being said, there are some major difference between a bulb, rhizome, tuber or corm.

How long have humans been cultivating bulbs? Where and when did cultivation begin?

No one really knows exactly how long people have been growing and fussing over bulbs, but we have a few clues. Saffron (which comes from the three red stigmas found in each crocus bloom) appears in a 7th century BC Assyrian botanical treatise, so we can safely assume crocus cultivation began long before that. The Bible also mentions several geophytes, including iris, garlic and saffron.  Meanwhile, the first drawings of lilies found in Crete date back to 1580 BC, and Asiatic lilies are mentioned in writing in Chinese tests from 78-140 AD.

There’s a record of the Seljuk Turks growing tulips around 1000 AD in what is now Baghdad, but since they brought those bulbs with them from their homeland on the Central Asian steppes, it is likely they had been raising them for much longer than that. Daffodils, probably the most hybridized bulbs on the planet, are native to the Iberian Peninsula (Spain and Portugal) but have been grown all over the world for thousands of years because of their portability in dormancy.

Where are some of the strangest tales of bulbs in our history?

Western and Eastern mythology and history are rich with references to bulbs. Narcissus, the true name of a daffodil, is the identity of a tragic Greek character who fell in love with his own reflection. Daffodils were also carried by Roman legions to the British Isles, where they have now become a state symbol of Wales, despite the fact that they are not native. The “saffron crocus” is probably a form of a crocus that Bronze Age folks of the Mediterranean harvested so extensively that it eventually became a sterile corm. When Hercules wrestled Cerberus, a vicious three-headed dog who guarded the Underworld, Cerberus foamed at the mouth and wherever he drooled, a winter aconite sprang forth.

Perhaps the most sordid tale in bulb history occurred on a cold February day in 1637, when the entire Dutch economy imploded after a commodities bubble burst. What caused this? Tulips. Ordinary citizens became swept up in buying and selling tulip bulbs, with no intention of ever planting them. Tulip futures trading reached ridiculous speculative proportions. One lone tulip bulb was reportedly traded for wheat, rye, four oxen, eight pigs, 12 sheep, two vats of wine, four kegs of beer, two tons of butter, 1,000 pounds of cheese, a bed, some clothes and a silver cup! One day, the trading just stopped and prices utterly collapsed, leaving the last traders with massive debts that couldn’t possibly be paid and a court system so backlogged with breach of contract suits that the judiciary refused to hear anything about tulips. It was all very embarrassing and humiliating. Interestingly, the Dutch are now the leading importers of bulbs, though without the speculative pricing!

What are the newest varieties of bulbs?

New named varieties of bulbs come onto the market each year, primarily from the Big Three – Crocus, Daffodils and Tulips. Each will have some sort of a “new” trait. I’ve noticed that daffodil breeders have a thing of late for pink cups. The Orange Monarch is an exciting new crocus. And the annual parade of new tulips is astonishing. Just when you think the tulip couldn’t be more colorful, along comes a new variety!

Want to learn more about the fascinating history of bulbs and buy some bulbs of your own? Stop by the Fall Plant & Bulb Sale this Saturday and Sunday, September 23 and 24, from 9 a.m. - 5 p.m. Lectures will take place in the All-America Selections Garden at 11 a.m. and 1 p.m. each day.