Bromeliaceae in the Tropical Conservatory 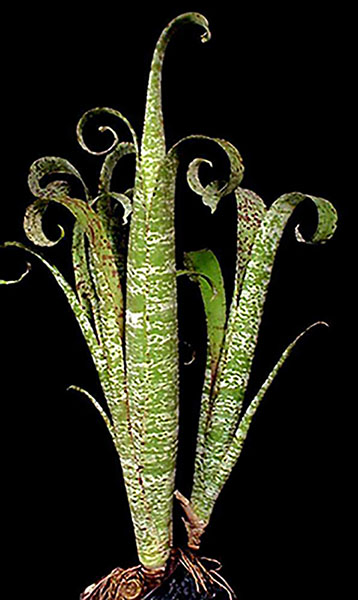 The family Bromeliaceae offers some fascinating plants, a variety of which can be found in the Boettcher Memorial Tropical Conservatory. Though the Gardens is currently closed due to COVID-19, you can learn about some of these plants now—and go on a mini scavenger hunt to find them when we re-open to the public.

Picture a 100-legged silver tarantula, as sparkly as a Christmas ornament—except cuter than that sounds. This is Tillandsia tectorum, one of the crown jewels of the Tillandsia world (or as I call it, the “Tilly” world). This species is native to Ecuador and Peru, where it grows on cliff faces and rock outcroppings between 3,000 and 8,200 feet in elevation. It evolved its silvery splendor out of necessity due to high exposure to light, UV rays and an arid climate. The intensely dense trichomes serve as its sunscreen and its way of catching moisture and nutrients from the air. This spectacular species is on display at the top level of the treehouse of the Boettcher Memorial Tropical Conservatory. When you can return to the Gardens, take a look: You can’t miss it!

More commonly known as Spanish moss, Tillandsia usneoides is a classic case of a common name creating misinformation and confusion. It is neither from Spain nor a moss. Rather, it is native to Mexico, Bermuda, Bahamas, Central America and the southern U.S.

This plant is the smallest member of the family Bromeliaceae but has long been characterized as a plant that grows so thickly that it strangles and kills trees—which is entirely untrue. It can, however, grow densely enough to shade out portions of the tree, thereby slowing its growth rate.

More than 100 years ago it was used for all sorts of interesting things: building insulation, mulch, mattress stuffing and padding for car seats. None of these uses apply today. Tillandsia usneoides grows in the Tropical Conservatory and in the display windows of our greenhouses.

Quesnelia is a small, lesser-known genus in the family Bromeliaceae. All 22 species are endemic (native) to the eastern swamps of Brazil, with most growing terrestrially. The genus is named after French businessman and patron of botany Edouard Prosper Quesnel.

When grown in cultivation these plants prefer cooler growing conditions than most of the other genera. Plants produce flower spikes of incredible colors but are very short-lived for a bromeliad, with each one only lasting about a week. The most sought-after species of this group is Q. marmorata ‘Tim Plowman’, which has beautifully curled leaf tips.