Anything but drab! Spanish draba (Draba hispanica) is always first to bloom. 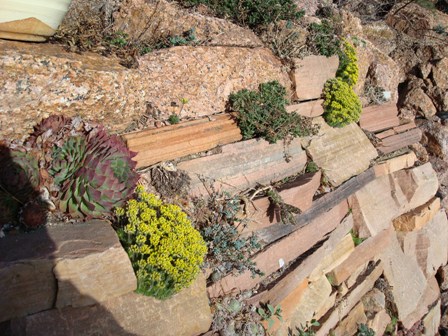 Poor drabas! Such a colorless name...and they have other image problems too--that acid yellow color and their general similarity to one another. Oh well: some of us look beyond these superficialities. We have a welter of alpine drabas we must wait until June to see in the alpine, but if you are lucky enough to have a rock garden, you can have drabas blooming early indeed. Spanish draba (Draba hispanica) is always my first to bloom. I admit most drabas wait till April to come out, but these specimens, on this hot wall, have been known to bloom in February! Right now they are in peak form and buzzing with bees. Wise gardeners know that microclimate in our fierce steppe climate is everything: I like to say that the south side of our homes are like Arizona and the north side like Alaska. On this toasty Sonoran wall the draba is precocious, but in my shady home rock garden you can find the same species still blooming in May, three months later (Alaska). In Colorado, there are no green thumbs. Just clever gardeners with compasses! Aaaah! Spring! P.S.: Just found this touching quote: "So our human life but dies to its root, and still puts forth its green blade to eternity." (Henry David Thoreau, Walden)