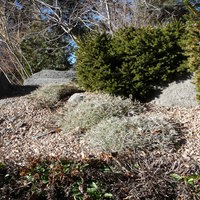 Two weeks ago we had highs in the single digits and an official low of -9 degrees at the gardens.  Once the thermometer goes below 0 degrees Fahrenheit a profound change takes place in the garden.  The cold burns brown or black any perennials or shrubs that were tardily deciduous, now only the true "evergreens" remain to  keep us occupied until the first sweeps of  brightly colored bulbs enliven the garden sometime in late February or March.  Luckily the Rock Alpine Garden has more than its fair share of plants that stay green, silver, or turn shades of chartreuse, red, or purple. 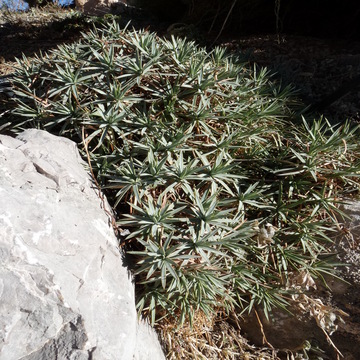 Acantholimons or prickly thrift add green, silver, or ghostly gray hedgehog like mounds to the rock garden this time of year.  Native to arid regions of Asia they thrive in the Intermountain West. On the same spiky theme is Erinacea anthyllis or the hedgehog broom from Spain, France and Morocco.  Its a mystery to me why this plant is not more widely grown in rock gardens or xeriscapes. Asking only for good drainage and full sun it creates dense mounds of olive green stems tipped with a spine.  The spines are only painful if you touch the cushions.  I have been lucky enough to see great cushions of this plant in the Atlas Mountains of Morocco and the Sierra Nevada of Southern Spain.  Still on the spiny trail is Astragalus angustifolius from Greece, while the cold has turned the leaves a pale shade of silver green the cushions are still effective against the bright green of a dwarf spruce. Leaving the spiky theme we move on to saxifrages which sharing the theme with the above plants are ornamental 365 days a year.  The porphyllum and encrusted saxifrages are the best for winter effect with their beautiful rossetes of spike like leaves or rounded leaves with patterns of silver, gray, rust and red. 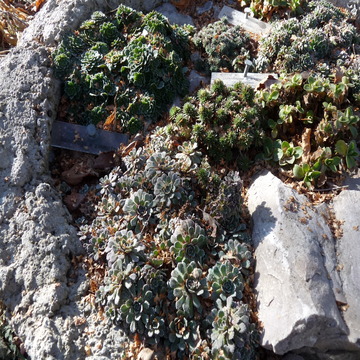 Chartreuse also makes its apperance  for those that need brighter colors in winter when the  needles on Pinus contorta var. latifolia 'Chief Joseph' turn a clear shade of golden green. 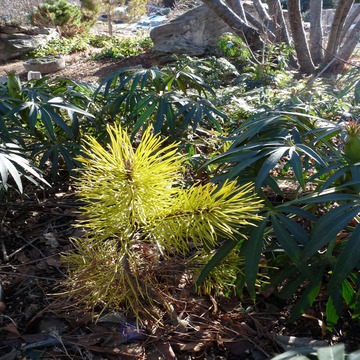 Hellebrous foetidus sets it off nicely with its dark green leaves.  Hellebores are also the only flower currently open in the rock garden with the classic Helleborus niger, the "Christmas rose" opening its first flowers.  This particular plant had bloomed reliably every year at Christmas, other individuals in the rock garden of the same species wait until January or February.  While winter has officially started there is still much to be seen on these balmy days in the Rock Alpine Garden.