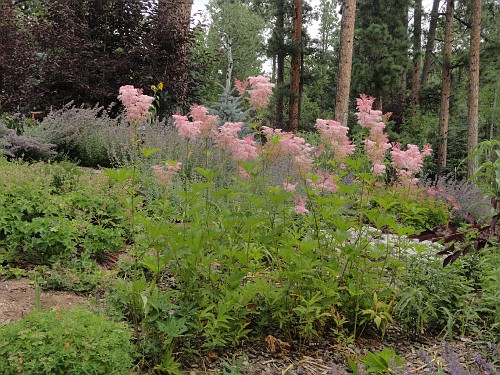 Over the years visitors often say things such as "You must have everything at the Gardens!"  Walking around on a beautiful autumn day like today that may seem the case. But in fact, we are missing many superb plants, both native and exotic. Filipendula is a case in point:  this genus of herbaceous Spiraea cousins includes a dozen or species widespread and abundant throughout much of the Northern Hemisphere... Filipendula has been effectively AWOL from Denver Botanic Gardens for most of my tenure. Few plants are as adaptable, common in the trade and in nature. I confess that I have planted a few way back when, but I have noticed in recent years they are pretty much gone. These pictures were taken at a private garden at over 8000' near Conifer: proof that our members beat us at our game!

The queen of the genus is unquestionably the Queen of the Prairie (F. rubra), one of the largest (it can be 8' tall when happy), showiest and most admired native plants of North America, largely confined to the Tall Grass Prairie of the Midwest. Like all the denizens of that biome, it was reduced drastically in its range when the prairies were busted for corn and soybeans. It is making a strong comeback in gardens due to its long season of midsummer bloom...if you want to see a spectacular clump like this one in Conifer, you will have to give it room, deep rich loam and lots of water. If you plant it, stand back! It spreads moderately by rhizomes to make a large, large, larger clump. 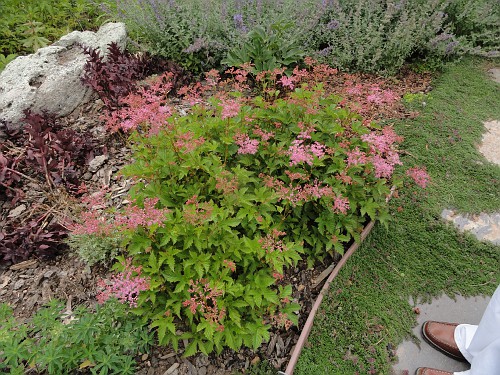 This tiny cousin--barely a foot tall--could well be called the "Princess of the woodland," since it seems to need a tad more shade. It can be tricky to find in nurseries, even mail order! 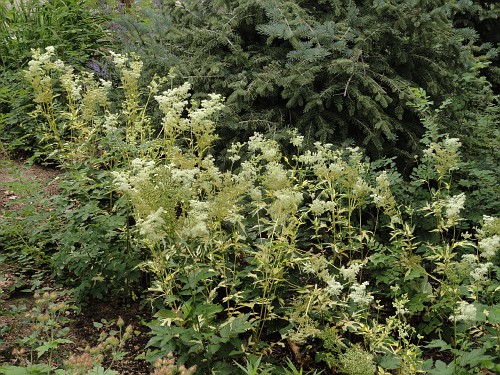 On the trip that Mike Bone and I took to Kazakhstan, several small, white flowered Filipendulas were everywhere in the steppe, in mountain meadows, along streams. Two were identified as F. ulmaria and F. vulgaris. Truth be said they look an awful lot like one another, and both resemble  F. hexapetala. Alas, white is not the most sought after hue (even this glowing, ivory white), although their ferny basal foliage is attractive throughout the season--especially in autumn when it can take on orange and scarlet tints.

These Filipendulas superficially resemble Astilbe, although their flowers have a rakish, slightly tipsy look to them unlike the symmetrical spires of Astilbe. Of course, filipendulas are in the rose family while Astilbes are saxifrage cousins. We collected seed of white filipendulas on the steppes of Kazakhstan which will be adorning several spots in Plantasia next year.

You will find spectacular plantings of lupines in mountain gardens throughout the state, like these in Conifer. These are descended from wild species restricted to the Pacific Northwest, British Columbia and Alaska, so they seem to do best in cooler climates and at altitude. I have seen fine specimens nonetheless in Denver. These are a parting glimpse of that same mountain garden of two long term, enthusiastic supporters of Denver  Botanic Gardens.  Now perhaps if I can only persuade my colleagues to get these into our York Street and Chatfield gardens...(sigh)