From the Vault: An Insect Specimen’s Untold Origin Story

In July 2014, the York Street landscape was dominated by technicolor glass sculptures and the flocks of visitors there to catch a glimpse. As much of a spectacle the artworks became, my attention was laser focused on the 3-meter-tall mast emerging from the center of a succulent in the Water-Smart Garden. It was the flowering spike of an Agave havardiana. The blossoms had yet to open, but it was clear that once they did, a raging party would ensue.

Agave havardiana is native to the Big Bend region of Texas and the deserts of northern Mexico – it is one of few agave species that are cold hardy enough to grow in Denver-area gardens. Agave plants are monocarpic perennials, meaning that they live for many years but only flower and set seed once, dying shortly after. One plant can spend decades slowly accumulating energy until it climactically sends up a giant stem adorned with yellow flowers absolutely loaded with sugar, a beacon attracting every pollinating insect it can possibly enlist in aiding its reproductive endeavors. After all, this is the plant’s lone opportunity to procreate. 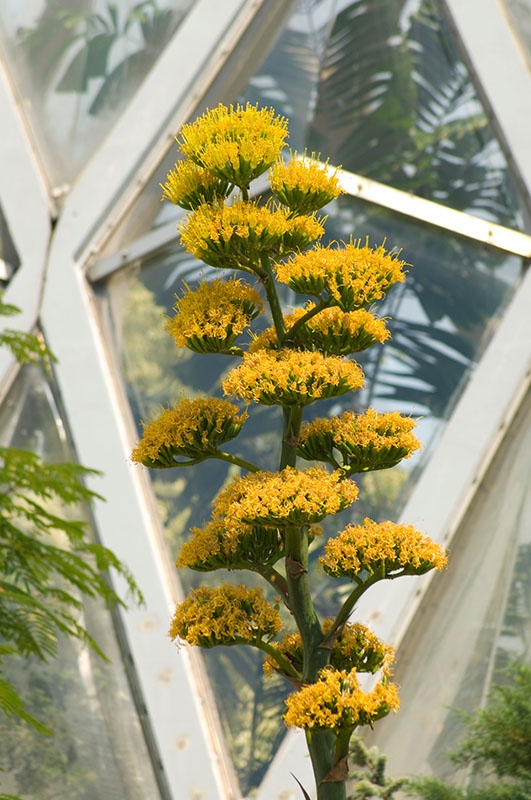 Finally, I arrived one morning to find the flowers had opened for business. For a week or so the plant was like a shrine to insect diversity. Bees and flies representing scores of taxonomic lineages buzzed around the crowning blossoms. Big swooping swallowtail butterflies gently landed to drink the sweet nectar. And the aphids – my goodness the aphids! The stem was coated with these powdery green and bright orange little jellybeans, each one determinedly sucking the sugary phloem from the plant. And as you may know, with aphids come ladybugs. The rosette and stem were crawling with ladybugs, adults and larvae, fiendishly devouring the endless buffet of aphids, and occasionally being tossed to the ground by protective ants.

As I marveled at the busy microcosm that coalesced on this single plant, erratic movements near the top of the rosette caught my eye. It seemed like a violent wresting match between two ladybugs, but I quickly realized something even more exciting. It was a Handsome Yucca Beetle, Enoclerus zonatus, pinning down its favorite prey item, a ladybug. I had occasionally seen these beetles in the yucca-studded open spaces surrounding Boulder, but never in a cultivated garden. They are tenacious predators that mimic ladybugs, blending in with their red and black spotted prey like a wolf in sheep’s clothing. I scooped up the specimen with a small glass vial and tucked it into my pocket.

Eventually the agave’s flowers went to fruit and the entire plant began to break down. I recall when it came time for the horticulturists to remove the withered remains, they discovered and angered a colony of yellow bumblebees, Bombus fervidus, that had nested in a cavity amongst the roots – what a special plant! The following year the Enoclerus beetle actually became the first specimen to be formally accessioned into Denver Botanic Gardens' collection of arthropods, donning the catalog number DBGA000001. I have yet to again encounter this species in the Gardens. Each time I slide out the glass-topped drawer containing our beetle specimens, I peek at the handsome creature and am reminded of how impactful a single plant can be.

From the Vault: Wonders and Oddities from the Gardens’ Collections

Inspired by the fantastic stories of collections highlighted in the 2020 exhibition From the Vault: Wonders and Oddities from the Gardens' Collections, staff working with art, library and natural history collections will be sharing wonders and oddities from the collections online. Each entry in this new blog series will feature a staff-favorite object. Enjoy these peeks into our storage vaults to learn more about our varied collections.