Tiny Lesquerella in the Piceance Basin 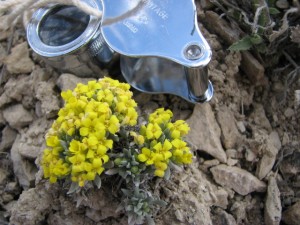 They may be tiny mustard plants but they have a huge impact in a region believed to contain one of the nation’s largest reservoirs of natural gas. Physaria congesta (Lesquerella congesta) and P. obcordata, both federally listed as Threatened under the National Endangered Species Act, are found right in the heart of all the activity associated with drilling for this oil and gas.

Denver Botanic Gardens is conducting a study on the genetic diversity of these two species. Both have very limited ranges and both are highly threatened by oil and gas development. Regulations are in place to protect these species from direct disturbance from oil and gas development. Indirect threats are harder to control. Pollinators essential for the survival of the plants could be affected by the roads, dust and chemicals used in drilling. Transporting the oil and gas back to a collection center creates large disturbances which become corridors for weeds and other threats to natural habitat.

ns have the best chance of future success and focusing seed collection and conservation efforts on those.