I have wanted to visit Machu Picchu since I first glimpsed a photo of it in my 4th grade geography text book.  Today, along with the rest of our tireless group, I would get that opportunity. 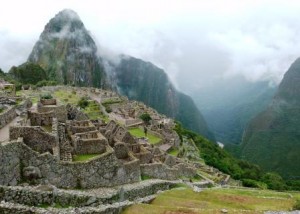 Construction of Machu Picchu is believed to have started around 1440 although the surrounding river valley had been inhabited and farmed for hundreds of years before that.  American historian Hiram Bingham is credited with “discovering” Machu Picchu in 1911 but there is evidence that many other outsiders new of its existence and locals were certainly aware.  In fact, a young boy of 11 actually led Bingham to Machu Picchu where he found several Quechua families living in some of the original structures.  Bingham began archeological studies and the site has been a center of research and 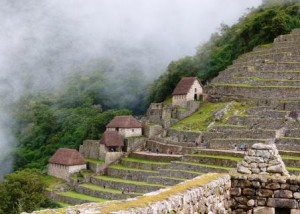 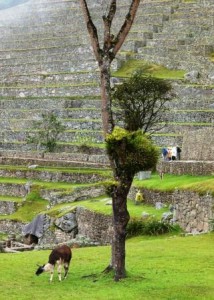 There are many theories of how Machu Picchu was used by the Inca Empire but several are more accepted than others.  Some believe it was an estate of the Inca emperor Pachacuti (who may have overseen most of the construction of the site).   Many of the human bones recovered from the site are female leading some to believe Machu Picchu was some sort of monastery for chosen women.  Based on the number of trails leading to and from Machu Picchu, some now believe it could have been a center of commerce as well as a political, religious and social center.  Whatever its function, it is an impressive site and an incredible example of the blending of architecture into natural surroundings. 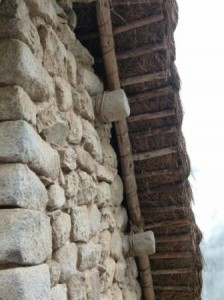 There are over 140 individual structures at Machu Picchu including temples, parks and individual residences with thatched roofs.  There are hundreds of stairs; some flights carved from single blocks of stone and of course the agricultural terraces.  The city sits in a seismic zone and many architectural details indicate the Inca had a strong understanding of engineering which resulted in minimal building damage due to earthquakes.  Water was supplied from a natural spring that fed into an intricate system of channels and fountains that flowed throughout the city.  Carlos, our guide, told us how construction of the terraces began simultaneously from the top and bottom of the mountain and then met in the middle resulting in each terrace being a different width. There is evidence that a wide range of crops were cultivated on these terraces including at least four different types of potato as well as corn, squash, peanuts, quinoa and avocados.  More than 60% of Machu Picchu faces east and the terraces are positioned to maximize exposure to sunlight.  I especially enjoyed visiting a small garden near the center of the complex where we were able to see several species of orchids growing on the stone and in the leaf litter of the garden. 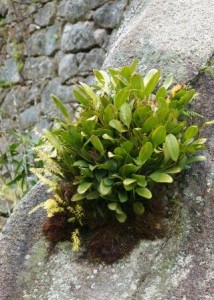 As grand as Machu Picchu is, it was only inhabited for about 100 years.  As the Spanish approached, the Inca evacuated in the mid 1500’s allowing the lush vegetation to quickly reclaim the city.  Sacred stones that were destroyed in other cities the conquistadors plundered were left untouched, leaving Machu Picchu a largely intact archeological site. 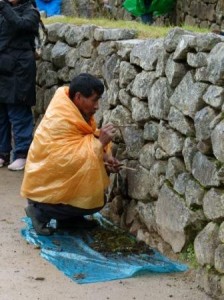 Today, Machu Picchu sits in a 325 square km Historical Sanctuary which not only protects the city, but also helps protect the areas rich flora and fauna.  In 1983, UNESCO designated Machu Picchu a World Heritage Site and in 2007, a worldwide internet poll voted Machu Picchu as one of the New Seven Wonders of the World.  During our visit, we saw many workers performing maintenance and restoration work, including removing plant growth from between stone work, repairing mortar, and (along with several llama) trimming grass.  Machu Picchu is the largest tourist attraction in Peru and concerns have risen over the impact of so many visitors to this ancient site.  The government has set restrictions on development in the area and just last year started restricting the number of daily visitors.  There have been attempts to construct a helipad in the area but the Peruvian government has yet to approve such a plan.  In fact, there is a no-fly-zone over the site. While we visited the site, clouds were continually moving in and out - we were occasionally misted with light rain and just as quickly, we would be treated to sunshine.  While we probably could have lived without the rain, the weather made for an ever-changing view of the city and surrounding mountains and an appreciation for the engineering of the cities drainage systems.  It is hard to describe the awe inspired by visiting this site.  All I can say is it lived up to dreams inspired by my 4th grade geography text.  It is a magical site – get there if you can. 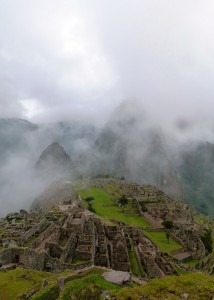 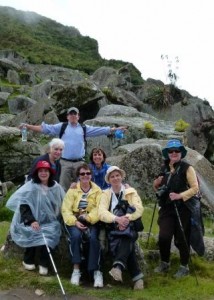