After a quick breakfast at our hotel, our adventurous group of travelers loaded a bus and began a day of exploration of the Urubamba Sacred Valley. 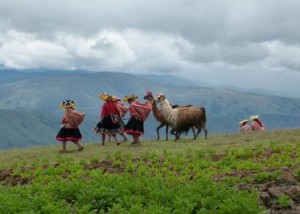 After following the Urubamba River out of Cusco, we began climbing along a new highway to Cuyuni Pass, a mountain peak at an elevation of nearly 14,000 feet.  After being greeted by our guide, we spent the next several hours hiking along an Andean mountain ridge where we caught a glimpse into the daily lives and cultural traditions of the Cuyuni Native Community. 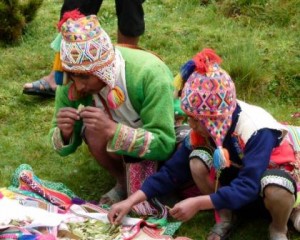 To begin our hike, a Cuyuni shaman and his son prepared an offering to Pachamama or the Earth Mother who presides over planting and harvesting of crops.  The shaman prepared a small satchel containing coca leaves, cuy meat, llama fat and other valued items that was then burned so the smoke could reach the farthest reaches of the mountain peaks above and fields and valleys below. As we continued our hike, we came upon a group of women spinning wool harvested from the sheep and llama that the community tends.  Further along the ridge, another group of women were weaving the fibers into colorful fabrics. The clothing of these Andean people is iconic and the natural fibers are dyed using natural pigments created from roots, flowers and fruits of the surrounding alpine flora. We began a slight descent and participated in the blessing and celebration of the beginning of the harvest of one of the most beautiful potato patches I have ever seen.  The plants were lush and sturdy, the bloss 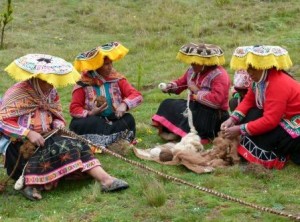 oms were large and brightly colored and as we would find out a little later, the potatoes were delicious.  Over 400 varieties of potatoes are crown throughout the region, a lesson in bio-diversity of our food crops that many food producers could learn from.  The celebration of the harvest concluded with a joyful dance that we were all welcome to participate in.  I hope our hosts were not disappointed in our enthusiasm for the dance.  It’s just hard to dance too wildly when you are at an elevation approaching 14,000 feet!

We were next treated to a delicious lunch at a nearby café where we enjoyed freshly boiled potatoes served with a wonderful salty cheese.  Both were delicious by themselves, but together they were out of this world.  We also dined on the freshest and most local French fries possible, quinoa crusted chicken, colorful vegetable trays, a delicious (if oddly colored) olive infused rice and a wonderful potato soup.  For dessert – hot doughnuts with a sweet dipping sauce.  So much for losing weight on this trip. After lunch, we were able to view the “baptizing” of a llama to ensure a productive breeding season.  The baptism concluded with another celebratory dance – a good opportunity to work off a bit of the amazing lunch. After shopping for hand-made scarves, hats, gloves and other items made by our hosts, we said our good-byes and headed for slightly lower ground.  The Cuyuni people were so genuine and open, I felt like we had made many new friends.  Apparently during the potato harvest dance, I made a favorable impression on one of the young women in the group and with a little arm-twisting, I could have stayed and begun a new life as a potato farmer.  I can think of worse jobs and much worse places to start a new life but I decided I would decline and continue with the group. It was an honor and pleasure to have the opportunity to learn more about Cuyuni customs and to be invited to participate in their daily lives.  It was an experience that I won’t soon forget. 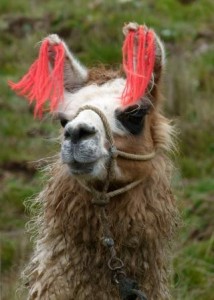 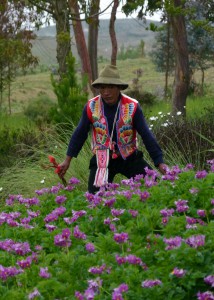