Orostachys: living jade for the garden 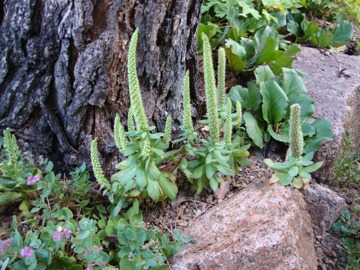 This time of year there is no end of vibrant, glorious color at Denver Botanic Gardens. May I remind you that green is also a color? Few plants exemplify the paradox that gardens are not just about showy flowers than these modest succulents from East Asia: Orostachys are closely allied to Sedum (and have been classified as such) although they suggest hens and chicks (Sempervivum) more to my eyes. The flowers are actually miniscule...but everyone loves and appreciates these accommodating succulents. I find they grow best on shallow soils or in pots: quite a number of species and hybrids will be coming into bloom over the next month or so. At DBG check for them in the Rock Alpine Garden (although finding them in that treasure trove of gems could be a challenge!) 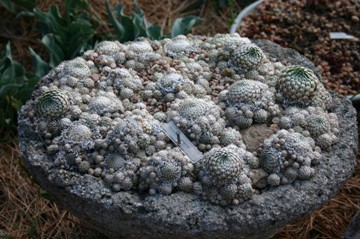 Orostachys spinosa in a trough

You know you have succeeded when you are copied: this picture (or something like it) has shown up in books, in nursery catalogues, on advertising flyers and in other people's talks: people just love the way the gray trough seems to morph into these gnarly, symmetrical globules of succulence. So they steal my image and use it without permission...(I admit I am flattered...).  Where is the flashy red or yellow? You do not need garish color to delight. When you have seen this wondeful little plant growing literally by the millions across the mountains and steppes of Kazakhstan and Mongolia, a trough like this is hopelessly evocative. Who needs petunias? OK, OK, before you get all huffy, I confess I like petunias too, and grow quite a few (albeit mostly in containers as well...) 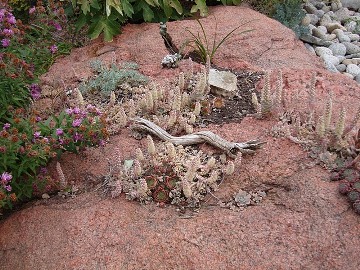 Perhaps the most widespread Orostachys in cultivation is this munchkin from Japan (I believe) which has been sold over the years under a plethora of names. It seems to be settling down to this epithet, although one still encounters O. furusei in some nurseries. If you can make it happy (which is not hard: part shade or sun on shallow soil in a rock garden or container) it will form wide masses of tiny pagodas that are irresistibly cute this time of year...Here it is growing on top of a rock in the Snyder's awesome Littleton garden, proving (irrefutably), once and for all, that less is more!