Medicinal Plant Intern at the Gardens

To be honest with you, I had very little knowledge of medicinal plants before I started as the medicinal plant intern here at Denver Botanic Gardens. The little that I did know came from being raised by my homeopathic hippie mother, whose two main rules were: no vaccines and if it tastes like cat pee it’s probably good for your body. I remember when she tried to persuade me to drink some apple cider vinegar, claiming it was good “for one’s digestive system.” I, in turn, tried to convince her it was also good “for cleaning one’s oven.”

I first heard of this internship through my Plant Systematics class at Colorado State University (CSU) in Fort Collins. The medicinal plants internship sounded interesting to me, mainly because it had writing (science writing, to be exact) as a component. My two undergraduate majors are English (with an emphasis on creative writing) and biology (with an emphasis on botany). I had originally thought of them as two separate schools of thought, until I read Hope Jahren’s book “Lab Girl.” From my readings, I realized that I could combine both English and biology in science writing. Being an honors student at CSU, I decided to embark on my required honors thesis arguing for creative science writing as a better means of communication between scientists and the public.

My passion for creative science writing has only increased since becoming an intern at the Gardens. This is the first time the Gardens has offered a Medicinal Plant Internship, and neither I nor Gardens’ horticulturist Blake Burger, my staff mentor and founder of the Denver Medicinal Plant Society, really had any idea where to begin. We started by narrowing down 20 plants for me to research and write about in short exhibits, providing mythology as well as science on the medicinal aspects of the plant. After about two weeks, I had finished the 20 plants and added 10 more, as 30 sounded more satisfying of a number.

After all 30 exhibits had been written, Blake asked me to reformat the exhibits into a monograph style. A monograph is a format used by herbalists. It becomes similar to a dictionary entry for each medicinal plant, listing different categories from “medicinal properties” to “mythology.” During this reformatting, Blake and I decided that I should also do some blogging on his Denver Medicinal Plant Society website, as well as record short videos of me performing some of the recipes we had found while researching.

I’m enjoying the time I spend filming, editing and writing all about things I have come to appreciate: medicinal plants. In my research and writings, as well as in publications on medicinal plants I’ve read, I’ve come to realize that the stigma of “pseudo-science” that these plants had originally received is now being demolished thanks to such events as antibiotic resistance, GMOs and cancer research. I certainly hope that my work at the Gardens this summer contributes to furthering the popularity of medicinal plant use, as well as encourages people to become more scientifically literate. 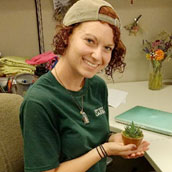 About the author: Kenna Castleberry is a senior at CSU studying both botany and English. She's currently working on an undergraduate honors thesis arguing for creative science writing as a way for scientists to communicate concepts to the public. She plans to attend graduate school, where she will major in environmental or forensic toxicology.

Hi I’ve tried reaching out about your internships and research opportunities for about a week now but have had no luck getting through and the emails for those do not work, but I was wondering if there were any summer opportunities available? Please email me if so, I will also be in Denver in April! Thank you!