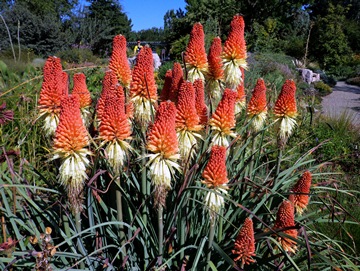 With this remarkable string of warm days in November, we can hardly be blamed for thinking summertime, and summertime is fast approaching in the foothills of South Africa, where the spectacular genus Kniphofia finds its greatest concentration of species. It is likely that the vast throng of ornamental monocots that emanate from South Africa--exemplified by the Torch Lilies--will be the largest group of plants of that great flora to impact North Hemisphere gardens. It is mysterious to me why there are so many thousands of extremely showy monocots--especially in the Iris, Amaryllis and Lily family (the latter in its very widest sense) concentrated in such a small geographic area. South Africa possesses the highest biodiversity in petaloid monocots on Planet Earth--much as it has the largest number of species of succulent plants concentrated in one region. This late summer blooming torch lily made an eye-searing focal point in the lower meadow of the Rock Alpine Garden last August: Kniphofia caulescens is among the hardiest species in this diverse genus, and this species has been championed by Plant Select. 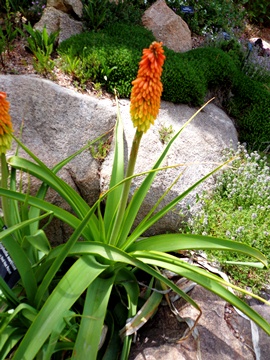 The variability in the genus Kniphofia is truly astonishing. This massive species (Kniphofia Northiae) has been growing in the Rock Alpine Garden for nearly 20 years. It is one of the largest in the genus, and one of the first to bloom as well. I shall never forget finding a vast slope of these on Bastard Voetpad Pass in the East Cape in January of 1994, stark black stems from having gone to seed--I'll bet they're blooming there right now as I type this in! (Bastard Footpath is the translation of the Pass's name from Afrikaans--for this is the pass those rascally sheep rustlers would take to poach lambs and take them back to the KwaZulu Natal lowlands--a little sociological aside there.) 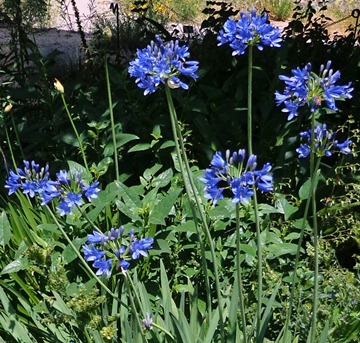 What could be more iconic of South African monocots than the grossly misnamed "Lily of the Nile"? Of course, the great concentration of Agapanthus species are concentrated in the southeastern Cape regions and Drakensberg where Agapanthus campanulatus var. patens climbs to alpine heights (Not exactly the Nile, don't you know?). In January of 1994 (midsummer in South Africa) I was astonished to find the cliffs above Harrismith on the Platberg positively swathed with blue agapanthus--a banner year (when I went back a few years later, there was not a single one blooming at the same time of year). These perform far more predictably in cultivation where they can get more regular watering. They color up the South African Plaza every summer--as well as the Lilac Garden perennial beds and other spots around Denver Botanic Gardens. They make stunning companion plants to Kniphofia cultivars that bloom at the same time, like K. 'Alcazar' or K. 'Royal Scepter'. 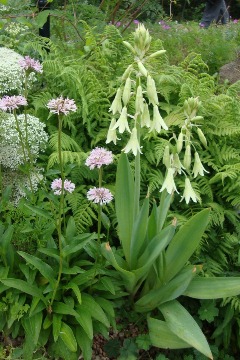 One rarely sees Galtonia planted in Colorado gardens, even though they are sold very cheaply as "summer bulbs" by mail order nurseries. Not nearly enough local gardeners take advantage of these spring planted bulbs--especially since many (Galtonia, Eucomis, Crocosmia) are extremely showy and reliably perennial garden plants in Colorado under typical irrigated garden conditions, that is. 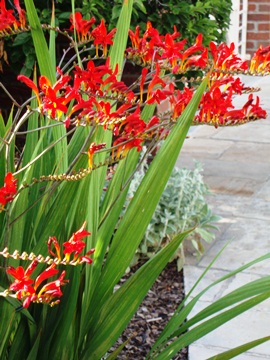 Almost the only Crocosmia one sees in the Front Range area is Crocosmia 'Lucifer'--a stunning hybrid bred almost a half century ago by Alan Bloom of Bressingham Gardens in Great Britain. I was astonished to find a hybrid very similar to this growing rampantly in the foothills of the Drakensberg on my recent trips--native plants can become invasive in the wrong places, obviously. But in Colorado, this is a very restrained and amazingly hardy and showy plant. I have seen it growing lustily in gardens in Vail. Since many local garden centers sell this in pots like a perennial, it has made small inroads in more sophisticated regional gardens. My mentor, Paul Maslin, grew a wide variety of Crocosmias throughout much of the 20th Century in his home in Boulder--most of which I have not seen elsewhere in Colorado. This is possibly one of the most neglected genera of plants for our regional gardens. 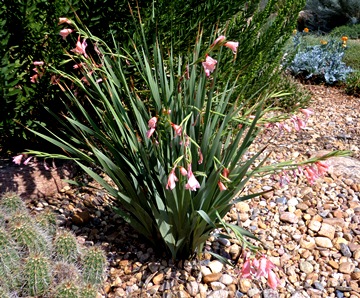 I first saw this blooming alongside North's Kniphofia (the latter was in seed) on that same Bastard Voetpad Pass...this is a local endemic of the East Cape, and has been thriving at the Garden at Kendrick Lake for a decade or more. Many local horticulturists are often surprised to find typical hybrid Gladioli forming big clumps and proving to be winter hardy: these are usually hybrids of Gladiolus dalenii, another species that often grows at high elevations. There are many more high altitude species that should perenialize in regional gardens once we obtain them. 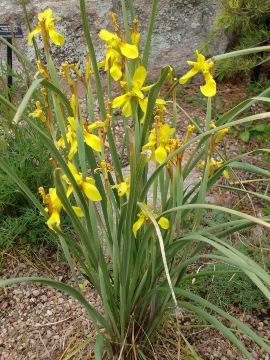 Moraea is one of the largest genera of South African monocots, and one of the most beautiful. This species has thrived for us at the Gardens for nearly three decades. It grows along streams and in moist swales everywhere across Lesotho and the Drakensberg escarpment. Since it is poisonous to livestock, has persisted and perhaps even spread despite the horrendous overgrazing that takes place over much of its range. It has an uncanny resemblance to a yellow Siberian iris, and grows and thrives alongside these in roughly the same garden conditions. 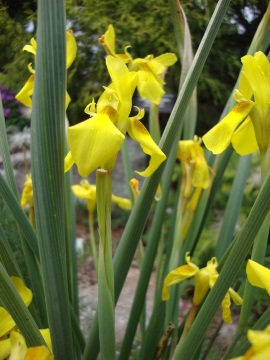 Unlike true irises, many Moraea have evanescent flowers that usually last only a single day in hot weather. But this species keeps producing flowers for weeks on end. It has a distressing habit of trying to be evergreen. If you do grow it, make sure you keep the foliage growing all winter long. By spring it can look a bit bedraggled--only then cut it back (like lavender it can die back if cut back hard in late autumn). 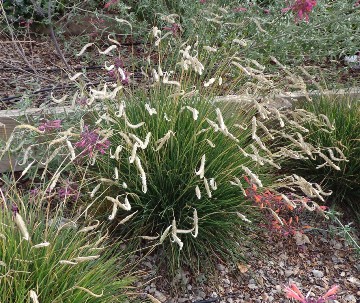 Like much of Colorado, the natural ecosystems throughout most of South Africa are comprised of grassland, and there are no end of extremely beautiful and unusual grasses that come from that region, many of which are proving to be fine garden plants in Colorado. The first to find its way to local gardens has been this wonderful bunch grass, Harpochloa falx is mostly found in mid-altitude grasslands in the Drakensberg. It needs regular irrigation and perennial border conditions in Colorado to grow well. Although it bears a striking resemblance to Blue Gramma grass (Bouteloua gracilis), and especially to the robust cultivar introduced by Plant Select (Blond Ambition) which I featured in a recent blog post, the resemblance is entirely accidental--they are on very different branches of the Grass Family tree (a mixed metaphor if there ever was one!). As I scroll back over the monocots I have featured in this blog, I am impressed with how incredibly vivid and colorful so many of the wildflowers are in South Africa. Why do these resonate so brightly in North Temperate Gardens?Anthropologists postulate that the very first humans evolved on the Highveld of that country and nearby Savannahs a bit further north. One cannot help but wonder if they have not branded their beauty in our souls somehow, deep in our human genes, over the course of our mutual coevolution as Australopithecines and finally Homo, on the windy, aromatic Highveld, the prairie, the steppe of South Africa? We humans are but interlopers in the Northern Hemisphere--immigrants who have come in the blink of a Geologic eye, and perhaps we are finally and simply bringing our ancestral flora along to remind us of home?