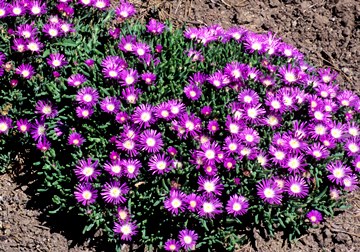 There have been a veritable flood of hardy ice plants on the market in recent years, to the point where we have forgotten about some of the worthy old timers. This happens to be a twenty year anniversary for the time when I first saw and collected this delightful morsel on the windy steppe near Springfontein, just a bit west of the Drakensberg mountains of South Africa. It was growing in sparse grassland that was terribly reminiscent of Colorado. This picture is a particularly robust specimen in cultivation--but the wild ones were almost as flashy. This was one of the second wave of hardy ice plants that were championed by Plant Select, and which certainly helped propel that worthy program.

The commonest query I get in recent years when the subject of hardy ice plants comes up is, "Aren't you afraid these will become weeds?" I can well imagine how a surgeon must feel when asked, "Aren't you afraid the patient will die on the table?" Of course, there is a remote possibility that any plant grown out of "context" (although humans have impacted practically every square centimeter of the earth so that I wonder if there really is a "natural," non-human context any more, truth be said...) and I invariably respond that Carpobrotus edulis (the weedy Californian ice plant in question) is a massive plant comparitively speaking, and the ecology of California coasts and shortgrass prairie in Colorado are not one and the same. Well... guess what I found across the street from my very own house? My charming South African waif has flown the coop! 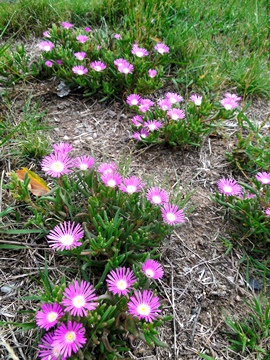 As I pull out my car from the garage, and drive a few hundred feet down my street, on the unkempt prairie to the west of me I've been noticing some pinkish-purplish flashes. What could these possibly be? I finally stopped the car and wandered out and Lo! and behold, a dozen or so Delosperma floribundum had naturalized in the weedy grassland. Horrors! What have I done? 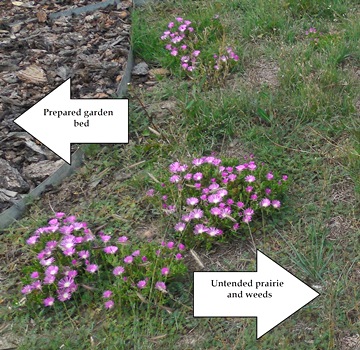 Here you can see that all the plants are growing within a few feet of a weed barrier and a mulched bed that was where the original plants were planted a year or so ago (and which have summarily died). I am curious if the demise of the parent plant was due to the richer soil, or the pathogens engendered by the bark mulch. The lesson here, of course, is that Delosperma floribundum is a grassland plant that prefers to grow in sparse shortgrass prairie, in a harsh pedocal soil to the fluffy garden pedalfer mulched with bark chips. This speaks volumes about our horticultural practices. We strive to grow plants from more humid climates that need more acid, humusy soils (pedalfers), while Plant Select and others are introducing plants from semi-arid regions that do much better in our alkaline, native mineral soils (pedocals). Crazy, no? 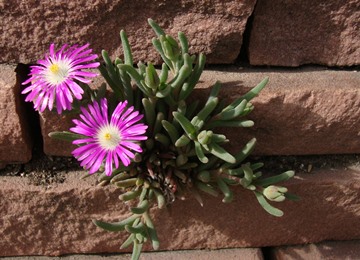 Of course, a few self sown seedlings a few feet from the parent plant does not a rampageous weed make (although the exotic plant haters are loth to make any distinctions). Here you can see that Delosperma floribundum has produced a random seedling on occasion in the past, such as this charming plantlet I photographed ten years or more ago growing in a low wall along the street in front of the Waring House. A number of the species ice plants have shown a willingness to seed--although rarely to the point of being a serious garden menace. I suspect a goodly number of our garden plants (including natives) can self sow enough to lead to a fastidious gardener avoiding them. I'm thinking of Red Valerian (Centranthus ruber) , Knautia macedonica, Perovskia, black-eyed-Susan (Rudbeckia triloba) and a throng of other garden classics that have been proscribed from this or that local garden because of their profuse spreading. They are pesky plants in the wrong spot, perhaps, but hardly obnoxious weeds.

Obviously I shall be watching these Delosperma over the years to see how much more (and if) they spread in the vant field. Meanwhile, I marvel that twenty years after first seeing these they've come home to roost, so to speak. If not home, across the way!