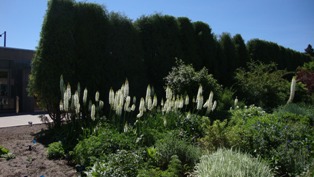 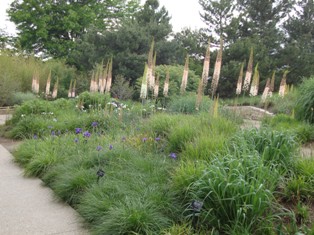 If you've been to Denver Botanic Gardens in the last month you can hardly have missed them: no, not the Henry Moore sculptures (albeit they stand out!), I'm talking about foxtail lilies: Eremurus. These stand out (and stand up!) in a dozen gardens: bristling exclamation points that are impossible to miss. The literal translation of this Greek-derived scientific name is "Desert tail", which isn't quite accurate. Foxtail lilies are sentinels of the true steppe of Eurasia, growing from Anatolia in the west all the way to Mongolia in the east. They are not found on true desert so much as grassy prairie and montane meadows. Mike Bone and I saw them in the Tian Shan mountains above Almaty last summer and on the foothills of the Altai mountains of Kazakhstan (high points of our trip last year). The climate of Central Asian steppe is the exact equivalent of ours (we are "homeoclimatic") so it's hardly surprising that Eremurus do so well in Colorado. I would be hard put to decide if I like the towering white Himalayan eremurus (Eremurus himalaicus) in the Perennial Walk more than the even taller Eremurus robustus blooming there now....or the yellow spires of Eremurus stenophyllus filling PlantAsia's steppe garden as we speak...or maybe the many burnished and brassy hybrids in gold, nearly brown and brilliant orange that make the Ornamental Grasses garden riveting this time of year, or encircle the annual test gardens...

These inspiring spires and towering turrets of bloom practically brand Denver Botanic Gardens, making it seem like foxtail lily botanic gardens for a month or so in early summer. I would be envious if I hadn't gone out and counted nearly a seventy foxtail lily stalks in my very own garden that have bloomed so far this year. One can never have enough of a good thing, right?