Fire danger and the garden 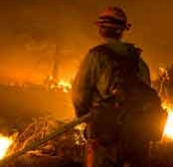 How easy it is to be lulled into complacency in the depths of winter when our attention is distracted by snowpack and driving conditions. We appear to have forgotten just how long and hot last summer was. June and July were not just hot, but extremely dry. Remember how summer sunsets were brilliantly colored due to the burning of vast swaths of Colorado mountains? Everyone in both Colorado Springs and Fort Collins--where fires burned so near to, even into their cities-- are less apt to have forgotten. Fire is omnipresent in and around the Rockies. We as a culture have largely evaded, ignored and ultimately pay an enormous price as a consequence. On Saturday, January 19 the Education Department here at the Gardens has organized a symposium on the subject of Firescaping. "Firescape" a neologism coined to describe the strategies that homeowners who live in fire-prone areas can employ to deal with the very real threats of fire. There is no guarantee that landscaping alone can eliminate the threat completely. But if we as a region could employ firescaping principles widely, ongoing and consistently, it is very likely that the dangers and the damage of large fires could be substantially reduced. A blog by the Director of Education at Denver Botanic Gardens last spring demonstrates dramatically how we at the Gardens employ fire to manage the Plains Garden. Not that you can necessarily follow suit, but this demonstrates how fire itself is a tool for managing fire dependent landscapes. It is imperative for anyone who lives here to realize that three of the major forest systems of Colorado are dependent upon fire for their long term health--or at least for their perpetuation. 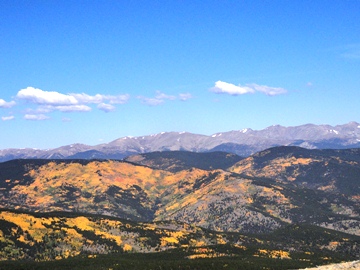 I took this picture last autumn of the magnificent aspen display that covers much of Gilpin County north of Mount Evans. All of that bright yellow aspen, and much of that forest green and the pale brown meadows as well would not be there if that county had not been burned repeatedly in recent centuries. Both the aspen (Populus tremuloides) and the commonest montane conifer, lodgepole pine (Pinus contorta), are fire-dependent. Both forest types have been protected from forest fires to such an extent during the last century that these forests are aging, and many native stands of aspen are declining from diseases accelerated by senescence such as Phytophthora. Lodgepole pines have cones that are famously serontinous--a wonderful term referring to a cone that needs fire to open and disperse its seeds.  I can only imagine how many billions or even trillions of seeds are patiently waiting on Colorado's lodgepoles for fire to open them up. And that fire is sure to become a conflagration due to economies we have taken with forest management across the West. 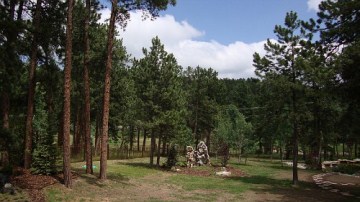 The third major forest tree in Colorado that depends on fire is the ponderosa. Fire is essential for the long term health of forests is the lower montane and foothills dominated by ponderosa pine (Pinus ponderosa). This wonderful tree can reach massive proportions--there are groves of ponderosas near Pagosa Springs where many individuals soar over a hundred feet in height, and one has been measured at 160 feet! Those trees would not be that big if fire had not swept through repeatedly in their lifetimes to clear underbrush and competition and leave them the room to grow healthily. And yet hundreds of thousands of Coloradoans have built their homes among these not just fire-prone but fire-dependent trees! I remember as a child when a forest fire occurred above Boulder on Green Mountain. It left a large black stain on the mountain for the better part of a year, but the next spring the burned trees began to sprout--and a few years later that spot that had been burned was the only healthy forest patch on the mountain. The trees that had burned were able to resist pine bark beetle, but the rest of the forest around them turned a sickly chartreuse. That forest only recovered by a program of massive thinning done artificially by park crews in the next decade. So what are we who often live in these fire prone areas to do? Sign up this seminar, led by several of the leading authorities on this subject: I know Roger Rosenstetter who has been the Bureau of Land Management Botanist for the state of Idaho for decades has made a special study of landscaping to minimize fire liability. Everyone  who lives in the West needs to better understand fire ecology. I myself intend to be there. I hope you will join me! Click here for more information.