Denver Botanic Gardens and University of Denver (DU) are currently collaborating to conduct research that documents climate change effects on native flora in Colorado.  We have been using preserved specimens from the Gardens Kathryn Kalmbach Herbarium and other regional herbaria to determine if flowering time has changed over the last 100 years.  A preserved plant with reliable label data is proof positive that it existed in a specific place at a specific time in the state it is shown.  Such specimens show that some Colorado species were blooming on average as much as three weeks later 100 years ago than today-- a reflection of warming temperatures that are causing earlier springs. Amelia Bowman, '09 University of Denver (DU) graduate, first discovered this trend investigating a set of six early blooming species that were collected in Colorado since the late 1800's as a part of her Biology Honors thesis.  These were species suggested by Gardens curator Dina Clark, as those that were likely to have flowering cued by temperature and or 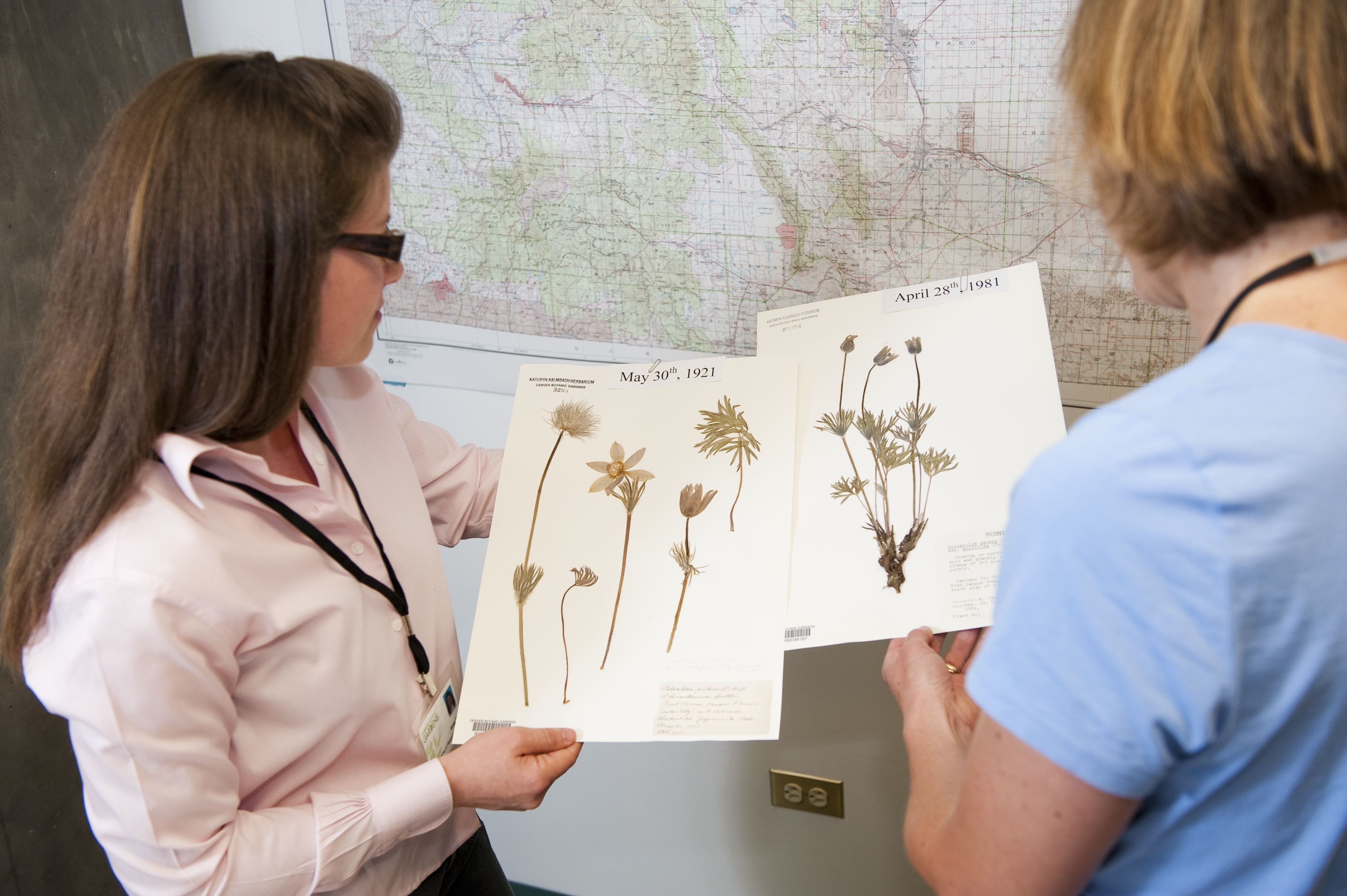 moisture.  Climate records show that both have increased in Colorado over the last 100 years.  Although there is much year-to-year variability, there is a significant change overall, and it appears more dramatic here in Colorado than has been reported in places like Massachusetts.

This summer, Francesca Aguirre-Wong ('10) with  DU undergraduates Ryan Whittney and Rob Robinson are working on an expansion of this project, doing the painstaking work of verifying each record and finding geographic coordinates for each specimen collected.  They are also joined by volunteer Eliot Jackson, a Denver native and granddaughter of Lainie Jackson, longtime and celebrated volunteer at the Gardens.  Their focus is currently on rare and endangered plants.

This latter phase of the project is supported by a grant from the National Fish and Wildlife Foundation in collaboration with The Nature Conservancy, and by a DU Helen Pustmueller fellowship.  The findings will assist efforts to develop management plans for imperiled Colorado species in the context of climate change. Whether a change in flowering time is "good" or "bad" depends on various factors, including behavior of pollinators.  That some species can adapt to a changing environment can be good, however, if pollinators for a specific species are cued by day length (which hasn't changed) while the flower is cued by temperature and moisture, there could be a disconnect that will harm both. For more information about the Kathryn Kalmbach Herbarium, please see our website.  For those interested in climate change and phenology, please check out the National Phenological Network and their citizen scientist program.