Located in the very heart of Denver Botanic Gardens, the Steppe Garden generates much curiosity and interest. The garden, along with the monumental volume “Steppes: The Plants and Ecology of the World’s Semiarid Region” written by Gardens staff members, has elevated awareness of the importance of steppe regions around the world. The Steppe Summit brings researchers and gardeners from far corners of the steppe to Denver, providing a powerful and fresh perspective on our native ecosystem.

This year, three speakers have flown from Eurasia to join with Mike Bone, curator of steppe collections at Denver Botanic Gardens. Each has produced ambitious books filled with unique photographs featuring hundreds of spectacular wildflowers, most of which would thrive in Denver with little or no supplemental irrigation. 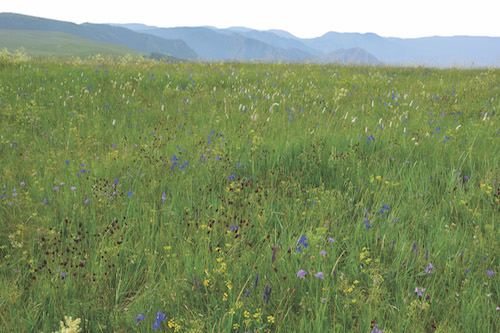 Saturday, Sept. 15, 9 a.m. – 4 p.m. Join the Gardens for its second annual Rocky Mountain Steppe Summit, featuring four leading speakers on the steppe regions. Learn about Denver’s unique ecosystem – one of the steppe regions of the world.   $69 PUBLIC, $62 MEMBER, $36 STUDENT (lunch is on your own)

Silk Road Flora Christopher Martin Gardner See some of the most beautiful wildflowers on the planet during this session. Chris is an Essex, England-born horticulturist who leads tours in the various Steppe regions – including Turkey, Central Asia, China, Chile, Morocco, Borneo – and lives in Turkey. He received a bachelor of science degree in horticulture from Reading University, England and spent fifteen years as a professional horticulturist and garden designer. He co-authored “The Plant Hunters” and “The Flowers of the Silk Road.”

The Tian Shan Vojtech Holubec Learn about Tian Shan, a 1,000 mile long mountain range in the border region of Kazakhstan, Kyrgyzstan, and Xinjiang in northwest China. Peaks reach more than 20,000 feet high. The flora is unique and full of choice endemics and the climate is similar to the Rocky Mountains. Vojtech co-authored the first ambitious book on this range that is being published right before the Symposium takes place. Agricultural botanist and plant geneticist by education, Vojtech is the director of the Czech Gene Bank for agricultural crops, working on projects dealing with crop wild relatives and plant conservation.

The Beauty Slope Zdenek Zvolanek This session covers lessons on growing steppe plants in a home landscape. Zdenek’s home garden in Karlik near Prague, Czech Republic, requires no irrigation and features Mediterranean and steppe climate plants that thrive on the challenging southern exposure. Zdenek is credited as one of the originators of the Czech crevice gardens style and has built gardens across North America, Scandinavia, Germany, England and the Czech Republic.

In Steppe with Lesotho Mike Bone This session summarizes the last two years of field work in the highest mountain kingdom of Africa, where the native vegetation is poorly studied. Mike, curator of steppe collections at Denver Botanic Gardens, documented new locations of Aloe polyphylla on these trips—the spectacular official flower of Africa’s Kingdom. Mike led two exploratory trips to Kazakhstan and Mongolia and has been on two collecting trips to Lesotho, South Africa. He spent part of the last two winters with Munich Botanic Garden and the Katse Botanic Garden to teach propagation techniques to local horticulturists.