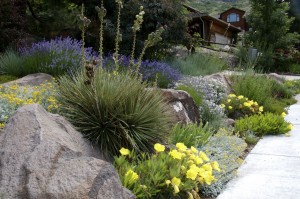 If a yard or garden looks like it has been transplanted from the desert, does that make it a “water-smart garden?”  One might make the assumption that the plants do not need much supplemental water and, therefore, the homeowner is being frugal with his or her water application.  This may actually be an incorrect notion.Many years ago a study was done in Phoenix, AZ that discovered water-smart gardens (Xeriscape was the term used in the study) used more water than conventional gardens.

The reason attributed to this was that the homeowners were unaware that desert plants typically go dormant during the hottest times of the year and do not need to be watered as much.   The homeowners were continuing to water them during this dormant period in order to (unnecessarily) “revive” them.   The gardens looked like, felt like and even smelled like “water-smart,” but actually did not qualify due to the overuse of water.

On the other side of the coin, if one walks past a landscape that has a lush Kentucky bluegrass lawn, one should not assume that the homeowner is using excessive amounts of water to keep their lawn in this state.

Even more years ago than the Phoenix study, there lived an avid gardener in Grand Junction, CO where the average annual precipitation is around 8 inches.  Although she had a relatively small lot, there were many perennials, shrubs and trees, and an extensive Kentucky bluegrass lawn.  She watered the lawn by dragging hoses that were connected to an electric pump and which had to be primed each time it was turned on.  This was both time-consuming and arduous.   In order to minimize the frequency of watering, she trained her lawn to be water-thrifty.  She did so by encouraging the roots to grow deeply by amending the soil heavily before planting the grass and watering the turf only as it became stressed.  Each time she watered, she extended the time between irrigations by one day until she was able to water every ten days and still maintain a rich green lawn.

In both of these cases, it is evident that appearance is not always an indicator of what is water-smart and what isn’t.  It is how the water is managed by people that really counts.

This article was written by guest blogger David Winger, and edited by Sarah Spearman.

If you’re interested in learning more about water-smart landscaping, David Winger will be teaching a two-class series , “Seven Principles of Water-Smart Gardening,” at Denver Botanic Gardens on Oct. 12 and 19 (6:30 – 8:30 pm).  Come and learn the many sound horticultural principles that will enhance a garden and do so with a minimum of water.  Register online or call 720-865-3580.