It’s been an interesting summer.  Lots of heat and not so much rain, for starters.  The combination of heat, drought, and subsequently stressed-out plants has made for banner years for many pests.  Some that are usually not even common enough to be a nuisance here at the Botanic Gardens have eliminated certain plants from gardens this year.

One pest in particular has been on my mind a lot in recent weeks: Popillia japonica, the Japanese Beetle.  Japanese Beetles, as their name suggests, are native to eastern Asia but were introduced to the eastern United States nearly a century ago.  However, west of the Mississippi, they had been uncommon, and discovered populations usually become the target of aggressive eradication efforts.  One such effort eliminated them from the western slope of Colorado in the last decade.

In fact, Colorado is one of nine states that enforce a Japanese Beetle quarantine.  The quarantine restricts the import of plants to Colorado from states to the East (plus New Mexico) to those that have been certified beetle-free, and it applies to everyone from the largest nurseries to the  home gardeners who send away for plants through the mail.  Violators face fines and mandatory pest treatment regimes.  Japanese Beetles—or more specifically, the exclusion and elimination of Japanese Beetles--are a priority for the Colorado Nursery Industry. 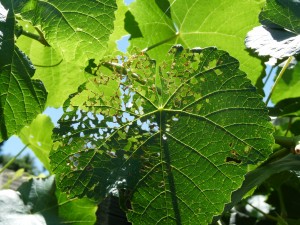 Why?  Because Japanese Beetles are some of the most destructive plant pests around.  Slightly smaller than dimes, adult beetles will feed on hundreds of common landscape plants, reducing them to sticks and skeletonized leaves if left unchecked.  They are gregarious feeders, attracting other beetles with pheromones when a good food source is found.  Adult beetles appear as summer heats up—usually the end of June or so. They are attractive—metallic green and bronze, with white hairs arranged in patches down their sides.  By mid-July, they are mating and laying eggs (females lay 40-60 per year, in several clutches of around 5 eggs each), usually in turfgrass (although ornamental grasses are hosts as well).  Larvae will dine on grass roots through the fall and again in spring before pupation.

Colorado has been monitoring for the Japanese Beetle since the mid-1990s.  A population established itself in the south metro-area in the early 2000s, and in Pueblo in 2009.  This year has seen first observances in central Denver, Boulder, and Fort Collins. 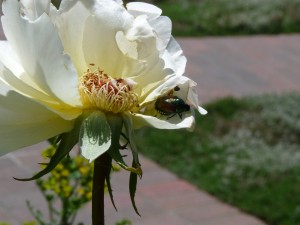 What should you do if you find Japanese Beetles on your property?  Try to kill them.  Low populations of adults can be hand-picked and thrown into warm soapy water for a quick, clean kill.  Larger populations may require insecticide use.  Control of larvae is also important.  Treatment of turfgrass with insecticide in the early fall or early spring when the larvae are feeding has been effective in other parts of the country.  Milky-spore disease, a biological control for larvae, has received mixed reviews for effectiveness.  Drying out lawns is one of the most effective controls for the larval phase.  As grass goes dormant, the larvae starve.  (Considering the drought we’re in, drying out the lawn might be considered responsible anyway).

For more information on Japanese beetles and how to control them, visit the Colorado State Extension web page and the USDA-APHIS web page.