Few things signify spring like trees covered in blossoms.  Spring so far has been on the early side, thanks to our warmer than usual temperatures through March.  Many species that would oftentimes only be beginning to bloom at this time of year are already finished flowering—they seem to think it’s already May in Colorado.  Still other species haven’t broken bud, and look as though we’ve had a month of today’s snowy weather. 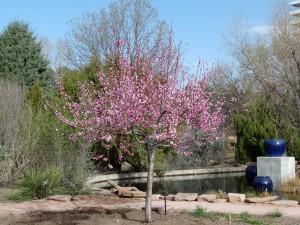 A survey of which plants are ahead of schedule and which seem to be stubbornly sticking to the calendar reveals an interesting pattern:  what a plant is doing when reflects the plant’s evolutionary history.

A self-guided tour at Denver Botanic Gardens that runs through April 30 will take you on a global trek through the genus Prunus.  Cherries, peaches, almonds, and plums are all included in this section of the rose family which has members native across the Northern Hemisphere.

Because of their northern nativity, Prunus actually require a period of dormancy in the cold to grow and reproduce normally.  What to us appears as a single stretch of leafless repose, though, is actually divided into two distinct parts.  At the end of summer, the buds for next spring have been produced but are kept dormant by hormones produced in the active leaves and growing points of the plant.  As autumn progresses with cooler temperatures and shorter days, the buds produce their own dormancy-inducing chemicals.

When the plant is keeping its own buds from growing it is said to be in “endodormancy.”  Endodormancy can last from a few weeks to a few months in the first part of the fall and winter.  It typically comes to an end when the chemicals keeping the buds dormant degrade.  At this stage, the plant now just needs a long enough warm spell to complete metabolic processes that lead to bud break.  As long as cold temperatures prevent this from happening, the plant is said to be in “ecodormancy.”

And that takes me back to evolutionary history.  Those Denver trees that are in a full-on rush to summer?  They’re from Asia (or cultivated from Asian roots), whose forests and steppes experience much less dramatic seasonal transitions than we’re accustomed to.   Warm spells and late frosts are seldom experienced there so the plants that flowered and leafed out earliest typically got a leg up (a limb up?) on their competitors.  Monopolization of pollinators and a longer photosynthetic season lead to heavier fruit set and more offspring to the next generation (offspring that share a proclivity to early flowering).  Plants that snooze lose in an Asian climate. 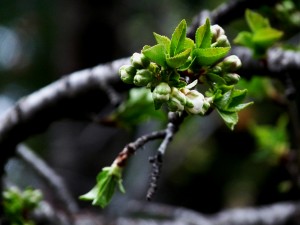 Plants from western North America are a bit more cautious, for good reason.  If a December warm spell is mistaken for springtime, a lot of resources will be frozen away when January strikes.  A late April return to winter is equally damaging.  Plants that evolved in the North American steppes were only successful with a deeper ecodormancy and slower metabolic spring start-up—fewer resources were lost to the weather and could instead be dedicated to producing seeds.  One of our common native Prunus species, Prunus pumila var besseyi (western sand cherry) is only now beginning to swell buds and flower, over a month later than some of its eastern counterparts.

Both eastern and western Prunus respond to earlier spring warming, a hallmark symptom of climate change.  Some models predict that by 2050 spring flowering will be, on average, one to two weeks earlier than today.

Along with the Prunus tour, visitors to Denver Botanic Gardens for the next month have a unique opportunity to participate in a nation-wide citizen science project:  the Cherry Blossom Blitz from Project Budburst.  This project seeks to record flowering times for Prunus species across the nation, leading to a clearer picture of springtime climate patterns.