Safaris are expensive.  So why not trade the very large for the very small?  Stay away from tourist traps and take a trip into your back yard for action worthy of television special—you won’t even need to pack a lunch.
Even if at first glance the average home’s yard and garden might seem virtually free of animal life, a closer look shows how wrong first glances can be.  Arthropods—members of the largest phylum in the animal kingdom—fill every role you would expect from larger creatures, from herbivore to predator to scavenger.  Arthropods include insects, spiders, mites, crustaceans, and others, and a very large number of them go about their lives under your very nose.
It’s easy to forget that not every creepy-crawly is out to get us or our precious garden plants.  A great number of them survive on decaying organic matter or (better yet!) on other arthropods.
Perhaps the best known predatory insect is the ladybird beetle, or ladybug (so-dubbed despite not being a bug in the strictest sense).  Most of us become familiar with adult ladybird beetles as very small children because of their flashy coloring and reputation for gentility.  Show an adult human a juvenile ladybug, though, and you’re likely to elicit screams, or at least a shudder.  Looking a bit like a red and black crocodile covered with short spines, juvenile ladybugs are voracious consumers of aphids and other sap-sucking plant pests.  Chances are good that somewhere in your yard or patio you have aphids, and where there are aphids, usually ladybugs aren’t far behind.  Young ladybugs search for their prey, crawling quickly all over plants in search of a meal.  When they find suitable prey they quickly consume it and continue searching almost immediately—they are eating machines. 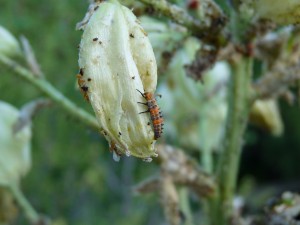 So what is an aphid to do?  Camouflage is of some use, as is leaping to the ground when danger threatens nearby.  It will be a long walk back up the plant, but better that than becoming dinner.  If a colony of aphids is lucky, though, it will be adopted by a colony of ants.  You might think that ants would carry aphids away to the nest to be devoured, but when an ant runs across an aphid the interaction is very different.  Aphids excrete a sugary solution called honeydew, and ants can’t get enough of it.  The result:  Ants manage aphids a bit like humans manage dairy cattle—cleaning and defending them in return for a liquid reward.  This is bad news for ladybugs, and for plants. It does make for excellent “bug-watching” though.
In addition to living plants, dead vegetation, and particularly trees, often attract interesting residents.  Terrifying in appearance but harmless to people insect is the giant ichneumon wasp—a parasitoid on the wood-boring horntail.  Female ichneumons have very long ovipositors which are often mistaken for stingers.  These insects are large, elegant, and creepy—congregations of males often surround sites on wood where a newly-pupated female is about to emerge.  Very few things will stir up a picnic like a group of 2” wasps, even if they can’t sting. 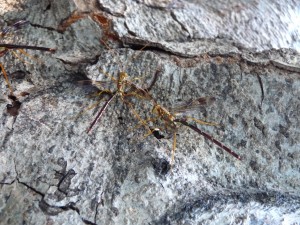 So grab a drink and maybe a magnifying glass, there’s a lot to see right outside the back door.