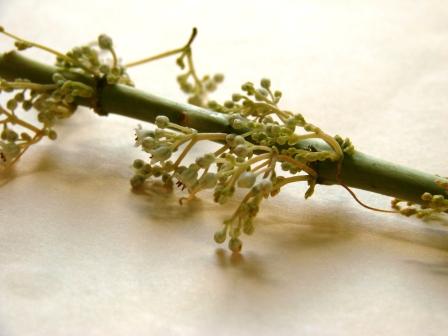 And I love them all, truly I do. Even the parasitic ones that, left unchecked, would eventually take over our beloved Plains Garden. I am fascinated by all the weird extremes of natural selection- slime molds, corn smuts, flowers that smell like carrion and parasitic plants all find their way to me. My friends in horticulture know that in college I studied plants much like this particular weirdo- the parasitic plant dodder (Cuscuta sp.).

I'm sorry the picture doesn't convey its incredibly insidious destructive nature... it's curled around the stem of one of our favorite natives, a Rocky Mountain beeplant. The dodder started its life asmost plants do, as a seedling in the ground. As it grows, it has to find another plant fast- it can't photosynthesize, so it needs to steal nutrients from others that can. It sniffs out its neighbors and is attracted to the particular odors (volatile oils) given off by potential hosts. I know this is starting to sound a little sci-fi, but here's where it gets worthy of the Alien series: once it touches a host, it curls around the stem (always counterclockwise!) and begins to grow tiny fingers of vascular tissue into the host stem! It does this so it can suck vital nutrients, and it will do this for the rest of its life, physically disconnected from the soil. Luckily they survive just one season in Colorado, still enough time for dodder to bloom and produce seed as an annual.

Dodder weakens its host plant, spreads plant diseases, and spreads itself easily through seed crops. Swarthmore College has this page with lots of great photos that mentions the use of flame throwers or acid sprays to control it, which let's face it, kind of sounds fun in a way. Those methods, or using herbicides like glyphosate, inevitably kill the host plant along with the dodder. Here in the Gardens, we have vigilant horticulturists who prevent any serious incursion of dodder by pulling it, so we don't get infestations like these...

I guess it's not a plant that is easy to love, but I can't help but admire something that has adapted so incredibly over time to the point of losing a fundamental facet of its "plantiness": it's not even green!