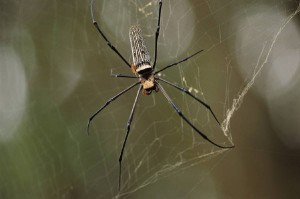 As summer ends and fall arrives, the gardener’s focus changes from growing all those nutritious veggies to “What is that spider?! And how do I keep it out of my home?!”  Most spiders live one to two years and many of them overwinter as eggs. They later develop into adult spiders and are usually full grown by summertime.  With the cooler weather, adult spiders (especially males) search for shelter in the fall and sometimes migrate into your home.

If you’re curious as to what type of spider you may see scurrying around your house, you’re most likely to see one of the following:

It’s not uncommon for a homeowner will sometimes encounter a Giant Wolf Spider thinking that it is a Tarantula.  This causes heart palpitations in both males and females in the household but the kids (up to a certain age) think it’s the coolest thing they’ve seen around home in a long time.  Many people also believe that Colorado's Front Range is home to numerous poisonous spiders such as the Brown Recluse, Hobo Spider, and more.  However, the reality is that the Black Widow is the only poisonous spider common in the Denver area.

And remember, the next time you see that spider in the garage or out in the garden, think twice before you get out the insecticide or the boot to destroy it. A spider is truly a work of art and one of your best friends to control insects in the garden.

To learn more about spiders and their close relatives, join us at the Gardens for Spiders and Their Kin: Myth and Facts on Saturday, October 30th.