As we swing into high summer and garden plants kick into overdrive, the fungi, bacteria, and viruses that rely on them start making appearances too.  These plant pathogens manifest themselves in many ways, from the elegant to the grotesque.
Rust fungi are one common pathogen that show up with warmer temperatures.  These fungi—along with a related group known as "smuts"—are some of the most destructive plant pathogens. Rusts and smuts are basidiomycetes, a group of fungi that produce their spores on a club-shaped apparatus.  Most people are familiar with basidiomycetes even without knowing it.  Most fleshy fungi that show up in yards like puffballs and conks are basidiomycetes, although these live off of dead wood instead of living tissue. 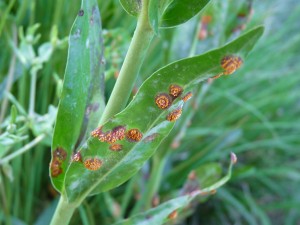 Rusts mostly attack the leaves and stems of plants, and appear as orange, yellow, or white eruptions (hence their name).  They infect a local area of the plant or can be systemic, essentially infesting every part of the plant.

Around 5,000 species of fungi are categorized as rusts and most are highly specialized, only attacking certain genera, species, or even varieties of plants.  Their life-cycles are usually complicated, involving up to 5 distinct stages, often on different hosts, and each stage with a different type of spore.  Spores are usually spread by the wind, but insects, rain, animals, and gardeners can all play a role in distributing them.  Some spores, carried by the wind, can travel hundreds of miles.

Spores germinating on the leaves of host plants quickly germinate (high humidity speeds this process up) and infiltrate the plant’s epidermis.  Once inside, the fungus proliferates in the spaces between cells where they are safe from cellular responses to infection.  Within a few days, the fungus produces its reproductive organs which rupture the plant surface and perpetuate the disease cycle.

Plants that have been infected with fungus use more water, both because of the fungus’ own water needs and because of the ruptured epidermis.  The fungus steals nutrients from the plant and destroys the photosynthetic capability of the area it infects, reducing overall plant vigor.  Most plants infected with rust fungi mature more quickly than uninfected plants and produce fewer, smaller seeds.

Unfortunately for gardeners, rust fungi are difficult to control.  Some preventative fungicides are available which keep spores from germinating on plant surfaces, but complete coverage and appropriate application timing are essential for success.  The most common way to fight rust fungi is to grow plant varieties that are resistant in the first place, or to find and eliminate one of the required host plants from the area.