Perhaps the largest botanical newsbreak of the past week was the publication in the Proceedings of the National Academy of Sciences of the United States of America that several mature, fully functional individuals of Silene stenophylla (a member of the carnation family that still exists today) had been grown from fruits found buried 38 meters underground, in permafrost, in Siberia.  The fruits had been taken there some 30,000 years ago by an arctic ground squirrel.  For whatever reason, they escaped being eaten and have been resting in the deep freeze ever since.

The plants did not grow from 30,000 year old seeds. The research team from the Russian Academy of Sciences tried germinating seeds of several species that were found in the prehistoric burrow, with limited success. Some seeds germinated, but none of the seedlings survived—their meristems (the “immortal” cells present at the growing points of plants) had degraded.

How the researchers were able to produce mature plants is much cooler than growing from seed (in my opinion, anyway).  They took a few cells from the placenta of the Silene fruits and grew them in sterile nutrient medium.

An aside before I go further, “Yes, plants have placentas.”  Similar to their mammalian counterparts, plant placentas supply developing seeds with nutrients from maternal tissue.  You deal with them more than you might realize:  that pithy white stuff in the middle of bell peppers?  Placenta.  The ooze that keeps tomato seeds congregated in those little globs?  Placenta.

Multiplying cells in medium is a common propagation method known as micropropagation or tissue culture.  We can take advantage of plant cells’ abilities to revert to a pluripotent stage and produce whole new plants under the right conditions. 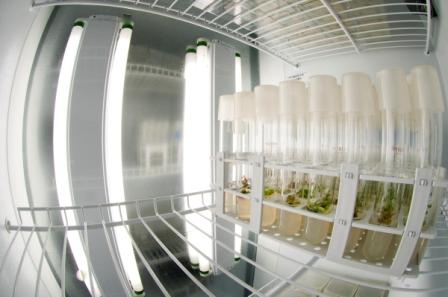 Botanic gardens and research institutions around the world use both micropropagation and cryopreservation to conserve plants that are in danger of becoming extinct.  One question regarding this process is how long, exactly, can one leave cells in the deep freeze before needing to warm them up and grow them on a bit?  At least for some species, this natural experiment suggests that it is a very long time, provided you have the right sort of tissue.  Placental material seems to be particularly resistant to freezing because it is so packed with sugars and other soluble nutrients that are on their way from the maternal plant into the seeds.  These dissolved particles prevent water molecules from organizing into ice crystals which would destroy the cells.

Headlines claiming millennia-old plants are a bit misleading (guilty!).  The plants that were produced by this method are not themselves 30,000 years old, they built their bodies out of carbon dioxide that was floating around in the present day.  The initial cells, though, were 30,000 years old, and “awoke” to continue their lives in a test tube.  This means that even though the plant tissue itself is new, the genes that are controlling their development are from the Pleistocene.  Comparing these genes with genes found in modern plants gives scientists a unique opportunity to study the evolutionary history of Silene stenophylla.

And to think we owe it to an unfastidious squirrel.