In a previous post I described some interactions between plants and insects that can make for interesting observation.  This week I’ll add another plant group that makes for some fun—the milkweeds (genus Asclepias).

Many species of Asclepias can be found in North America and can make good garden plants provided you can provide the space that they’re roving growth form requires.  Milkweeds have highly specialized floral structures, and they also bear latex—the white sap that gives them their common name--when wounded.  The genus name Asclepias comes from the name of the ancient Greek god of healing, Asclepios, because the latex of many species can be used medicinally. 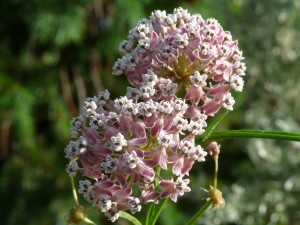 Beautiful in their own right, they are also the required host of the Monarch Butterfly (which is commonly seen in Colorado through the summer months).  Milkweeds produce poisons that can kill many herbivores, including both insects and larger things--sheep are particularly vulnerable.  Monarch caterpillars, though, have evolved to sequester the chemicals within their bodies, avoiding injury themselves and capturing the plants’ defensive properties for themselves in the process.  The caterpillars are not alone in this ability, either.  Another common consumer of milkweed is the milkweed beetle, a rather large red and black insect that operates on the same principle as the caterpillar. 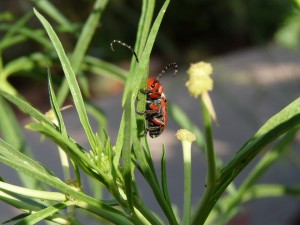 Besides hosting interesting diners, the milkweeds have a very specialized pollination system.  Most of the floral parts are fused together into a complex structure, and the pollen grains stuck together in conglomerations called “pollinia”—the same as in orchids.  The stamens (organs that produce the pollen) form elaborate horns that collect nectar; the pollinia are sequestered beneath narrow slits between them.  When an insect comes to sip nectar, often a foot slips into a slit and become lodged there.  When (and sometimes “if”) a pollinator removes its leg, two pollinia come along with it.  The pollinia are usually removed by a similar slit-trap structure on the stigma (the portion of the flower that accepts pollen) of other receptive flowers.

Milkweed fruits are usually large and can be ornate, and provide garden interest in the fall when they split open to release their seeds.  Milkweed seeds are tufted with fine hairs and dispersed by the wind.  The hairs are more buoyant than cork and warmer than goose down—in fact they were collected during World War II to fill live preservers. 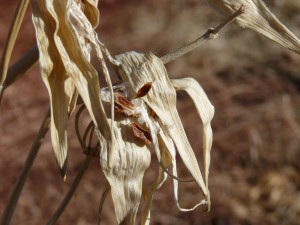 Look for milkweeds along roadsides and trails, particularly in low areas where water accumulates and along streams—they often appear somewhat out of place, like a tropical transplant in the middle of a field.  If you find a patch (or are lucky enough to have room for them in your garden) be sure to look for butterflies, beetles, and bees too!