Plants aren’t the only thing becoming more active this time of year.  Warmer weather triggers a lot of invertebrate activity, and you may be noticing that your home is suddenly (apparently) some sort of transcontinental superhighway for arthropods. Which is just one of the reasons that I love springtime. 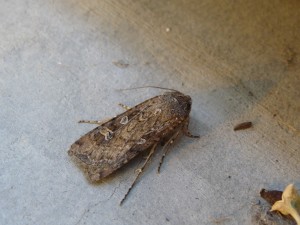 The six-legged companion that is perhaps most difficult to ignore is the miller moth, Euxoa auxiliaris.  Miller moths are the adult form of the (more sinister-sounding) army cutworm, an occasional crop and garden pest.  Army cutworms hatch in the fall and feed on just about anything green, including corn, tomatoes, beans, alfalfa, and wheat, but they're so small at this point that few people notice them.  They spend the winter underground, and wake up hungry in the spring (when farmers and gardeners are more likely to notice them and their damage).  After a few weeks they pupate and emerge as miller moths, which enjoy spending the summer sipping nectar from high mountain flowers.  This is why so many of them are seeking “over-day” accomodations in your houses and cars right now.  Every Euxoa auxiliaris from here to Eastern Kansas is headed to their summer home in the mountains and we’re stuck in the middle of a pretty crazy tourist season. (Is this like living in Estes Park?)  By late July the moths will turn around and come back through to lay eggs in fields and gardens.

Speaking of moths in general, have you wondered why they incessantly circle lamps?  It has a lot to do with how they find their way in the dark.  Many moths use polarized light (which we can’t perceive without the aid of special lenses) to determine direction and distance.  It works great when just the moon and the stars are available, but street (and table) lamps become problematic, sending false signals because of their number and their proximity.  For example, you can’t change your position relative to the moon (very much or very quickly), even by hopping in the car and driving like a maniac for Grand Junction.  Your position relative to street lamps, however, is a different story.  A moth which has mistaken a light bulb for the moon or a bright star probably “thinks” it’s flying straight by keeping the angle of incoming light to its eyes steady.  I often wonder if moths circling street lamps are having the best night of their lives—“I’ve been flying for miles and I’m not even a bit tired!”—but I’m told that moths don’t really think of such things.

Streetlamps accompanied by swarms of moths can be a good source for summertime fun (and science!).  Moths are heavily preyed upon by bats, which are able to hunt at night by using sonar.  Now here’s the fun part:  the right combination of keys and bangles, jingled, can produce just the sort of pings that a bat might produce and can send moths into their evolved bat-avoidance responses, which range from abrupt directional shifts to falling out of the air like a stone.  Some moths even produce their own pings as an auditory “I’m not tasty” warning (though these aren’t observable by the car key method).