As imperceptibly as Grief
The Summer lapsed away --
Too imperceptible at last
To seem like Perfidy --
A Quietness distilled
As Twilight long begun,
Or Nature spending with herself
Sequestered Afternoon --
The Dusk drew earlier in --
The Morning foreign shone --
A courteous, yet harrowing Grace,
As Guest, that would be gone --
And thus, without a Wing
Or service of a Keel
Our Summer made her light escape
Into the Beautiful.

The killing frost of 2012 approaches—many plants will perish this week.  And yet others will slip through the net.  What allows some plants to tolerate freezing temperatures?

As temperatures fall nearer and nearer the freezing point, several processes change within plant cells.  Protoplasmic streaming—the constant swirling of plant cell interiors—grinds to a halt, cell membranes harden, plugs form between conductive cells, and chlorophyll begins to break down (causing all that fall color).  These above-freezing changes can cause lethal damage in many tender plants, particularly those used to tropical climates.  At 32F, ice begins to form. 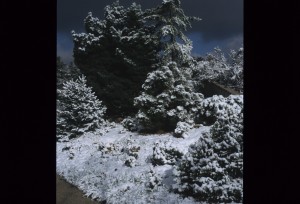 Ice formation is an interesting process.  As water molecules organize into ice they tend to expel molecules of other substances from the forming crystals.  The more molecules of other substances are in the water, the harder it is for the water to organize itself and lower its actual freezing point becomes.  This means that as ice crystals form, the remaining unfrozen water becomes harder and harder to freeze as it fills up with molecules that have been exiled from ice that has already formed.  Plants that are adapted to cold temperatures take advantage of this to prevent ice crystals from forming inside living cells and destroying them.

Within plants ice usually forms first in the xylem—cells that conduct water from the roots to the shoots of the plant.  Xylem is dead at functional maturity, so ice formation inside it is not in and of itself lethal to the plant. In fact, freezing in the xylem and the small spaces between living plant cells is one of the secrets to cold-tolerance.  As these areas freeze, the sugars and carbohydrates that are expelled by ice crystals accumulate inside living cells.  In fact, one major difference between hardy and non-hardy plants is the ability of their cell membranes to allow sugars and proteins into cells as temperatures drop.  To survive, plants must be able to load cells with “antifreeze” quickly.  Some plants even begin breaking down large molecules like carbohydrates into their component sugar molecules to increase cold tolerance.  A benefit to humans is a noticeable sweetening of some edible plants as temperatures drop.

Nearly any plant’s cold tolerance can be overcome by extremely rapid cooling.  In areas like Colorado that experience wide temperature swings in spring and fall, plants need to be able to activate and then deactivate their cold tolerance mechanisms quickly and many times per season in order to survive.

The ability to survive a freeze (or not) plays a major role in the distribution of plant life on both global and local scales.  Obviously the further north one gets the more frost tolerance will be required, but which plants grow in cold-air drainages and which on windy ridge-tops is often determined by cold tolerance differences of only a few degrees.