Fungi sometimes get a bad rap.  They are suspicious, insidious, and villainous—growing unseen and erupting without warning from just about anything.  Not everyone is down on fungus though (Wales celebrated National Fungus Day on October 14), and for good reason.  Fungi are important decomposers of plant matter (without them we’d all be neck-deep or worse in leaves and old wood) and are essential partners for plants for nutrient and water uptake.

In addition to their ecosystem services many species of fungi brighten our world in another way—by literally glowing.  Bioluminescence, the production of light by living things, is most popularly known among microscopic ocean-going organisms, but many species of fungi glow in the dark as well.  Among them is North American denizen Armillaria solidipes (formerly known as Armillaria ostoyae).  Armillaria solidipes is a parasitic fungus responsible for root-rot disease.  It infects just about every tree species found in the Rockies and is fairly common.  The genus Armillaria is found world-wide, and many of its member species glow in the dark. Humans have known about this for a long time.  In fact, Aristotle and Pliny the Elder both described light emission from rotten wood and Pliny even identified the culprit as the sweet tasting Armillaria mellea or honey mushroom.   The glow is known in European cultures as foxfire, fairyfire, or will o’ the wisp. 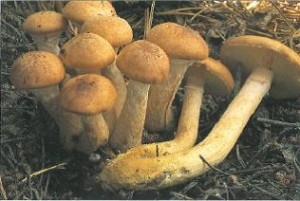 What is less well known is why fungi glow in the first place.  Mycologists have been studying fungal bioluminescence in earnest for over half a century, but why the compounds responsible for the rather eerie green glow are produced remains mysterious.  Some speculate that the glow is like warning coloration, designed to alert soil-dwelling organisms that would graze on the fungus that it contains dangerous toxins.  Others have hypothesized that the glow attracts predators of the same soil “fungivores”.  Still other scientists guess that the bioluminescence is merely a by-product of metabolic processes and serves no functional purpose.  Depending on the species, fungal bioluminescence may be all of these things, or something we haven’t thought of yet.

Our local bio-illuminater, Armillaria solidipes, only produces light in its non-reproductive portions, which are usually underground or within wood.  Its brownish mushrooms produce no light but are a good way to find patches of potentially glowing woodland during the day when in season.  Individual Armillaria spread through the forest using underground runners and can become quite large.  One individual in Oregon is a contender for the world’s largest organism—it covers 3 square miles and is estimated to weigh in at over a million pounds.

For more information about fungus of any kind, you can visit the Sam Mitchel Herbarium of Fungi located at the York St. site of Denver Botanic Gardens.

Our toes, our noses
Take hold on the loam,
Acquire the air.

Nobody sees us,
Stops us, betrays us;
The small grains make room.

Soft fists insist on
Heaving the needles,
The leafy bedding,

Even the paving.
Our hammers, our rams,
Earless and eyeless,

Perfectly voiceless,
Widen the crannies,
Shoulder through holes. We

Diet on water,
On crumbs of shadow,
Bland-mannered, asking

We are shelves, we are
Tables, we are meek,
We are edible,

Nudgers and shovers
In spite of ourselves.
Our kind multiplies:

We shall by morning
Inherit the earth.
Our foot's in the door.