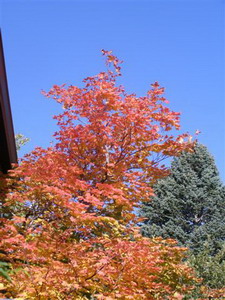 Aha! Got your attention!...Of course, that's not flames but fiery fall color you're looking at. If someone had told me there was a mature vine maple blazing like that in Colorado Springs, I'd tell them "Phooey! We've tried growing vine maples at Denver Botanic Gardens a dozen times: they get a little smaller every year, and eventually die: they're just not hardy". These pictures were taken this fall by none other than Judy Sellers, Board Member of DBG and chair of the Garden and Conservation Committee. She purchased that vine maple at Denver Botanic Gardens' plant sale twenty-seven (that's right 27!) years ago as a small sapling: it has obviously grown and flourished and challenged every truism I would have believed about the hardiness of vine maples. I was frankly flabbergasted when she sent me this image and simply had to share it with you.
Why would a tree like this grow for Judy and not for us? Judy lives near the Broadmoor, practically in the foothills where Gambels Oak is common and soils probably a bit more acid than at York Street. Vine Maples come from the Pacific Northwest, where the maritime climate and acid soils are utterly different from ours. But Colorado Springs is higher, colder and somewhat drier than Denver, so the playing field should be tilted towards Denver. My hunch is that her tree just has hardier genetics, possibly coming from colder areas than those we have tried. I have seen vine maples growing on the east side of the Cascades at very high altitudes where the climate must be very much like Colorado Springs or Denver: those are obviously the ones we need to try growing.
There are myriad lessons in this wonderful tale: private gardeners in our area often succeed with special plants we don't have (or have failed with) at Denver Botanic Gardens. DBG does not have a monopoly on plants hereabouts! And we have much to learn from you. The biggest lesson for me is that I don't know quite as much as I thought about vine maple: it's always worth trying plants you've lost yet another time. And of course the best lesson of all to take from this is buy lots of plants at DBG's plant sale: you too may end up growing something that we've lost at at the Gardens, and just imagine your bragging rights then! 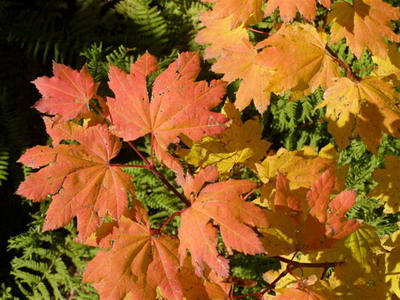 Here is a picture of Judy Sellers in one of her typical wild habitats! In addition to being a long time volunteer and supporter of DBG, Judy is a landscape designer and active environmental steward, prominent in the Nature Conservancy and Garden Club of America, among many other organizations. She has written the text for Colorado Wild, a stunning tribute to nature in Colorado. 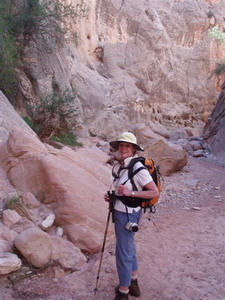