Plants, like most organisms, must overcome a number of challenges before they reach maturity.  Seeds are heavily preyed upon by insects, birds and mammals, and new seedlings face stiff competition from one another for light, water and nutrients.

Germinating in the fall or early winter when many competitors’ seeds are dormant is one of the strategies some plants use to overcome competition from other seedlings. Fall-germinating plants typically send down some roots and a few leaves and then hunker down for the winter.  Some may not make it through the cold, but those that do have a leg up the following spring:  they can be photosynthesizing away and growing when warmer temperatures are just beginning to thaw the soil to allow other seeds to germinate.

This matters, because for many seedlings size is everything, and being pre-empted for space and light is a death sentence.  When they first sprout, seedlings live off of the stored food reserve in the seed (called the endosperm).  If they fail to establish roots and enough photosynthetic leaf area to support themselves before the endosperm is used up they will die.

This is why plants that germinate in the shade usually become tall and thin with small leaves—everything the seedling has is being pushed into growing taller in order to overtop neighboring plants.  Germinating in the fall can help young plants become light-stealing neighbors themselves rather than victims of the same. 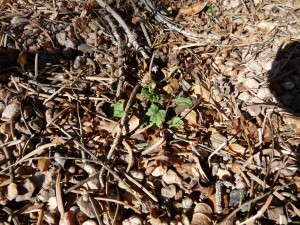 Some common garden weeds like cheatgrass (Bromus tectorum), henbit (Lamium amplexicaule) and cheeseweed (Malva neglecta) are fall germinators.  If you’re dying to get outside to do some gardening, you would do well to find them and pull them now when they’re still relatively small.  As vile a weed as Malva neglecta is, I can’t help but to respect (dare I say “admire”) it for its wintertime activities.  Look closely and you’ll notice perhaps its most marvelous feature:  heliotropism, or sun-tracking.

Heliotropism, from the Greek ήλιος –sun, and τρόπος -turning, is well known in sunflowers (Helianthus spp) which track the sun with their inflorescences.  Cheeseweed needs a lot of light to survive (part of why it likes vegetable gardens and other disturbed areas so much), and follows the sun with its leaves.  During the night the plant will reorient them (in the very literal sense of that word) towards the sunrise.

Find a Malva growing outdoors and you will see it holding its upper leaf surfaces as close to perpendicular to the incoming sunlight as it can manage.  By keeping the greatest amount of surface area exposed to solar radiation as possible during cold winter days, Malva neglecta maintains internal temperatures high enough for photosynthesis. 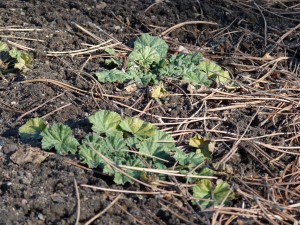 Unlike evergreen conifers, which usually suspend photosynthesis and sharply increase their “sun-screening” (photoprotection) capacity during the winter, physiological studies of Malva neglecta show that its photosynthetic capabilities are actually highest in winter!  While most plants hunkered down for the winter, cheeseweed is kicking into high gear and reaching for the sun—a remarkable feature that makes for a very successful plant.

This blog is third in a series, "Four-Minute Ecology."  New columns are posted every other Tuesday.