This time of year, a little inside and a little outside is where I want to be; it all depends on the weather. Luckily, either way I have something to see and something to learn. 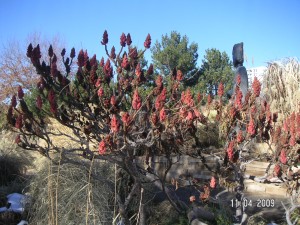 • Plant or Candelabra? Various Sumacs (members of the genus Rhus) can be counted on to provide garden interest year round, with leaves, flowers, and fruit catching the eye in different seasons. The fruit, called a drupe, often remains on the branches through the winter, but it can be harvested and ground into a spice used in Middle-Eastern cooking, or soaked in water, strained, and sweetened into a lemony drink sometimes know as rhus juice. The common three-leaved poisonous plants—ivy, oak, and sumac—are actually 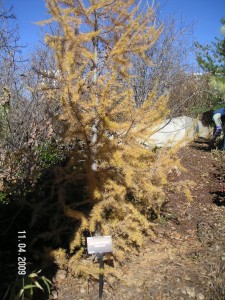 • Is This Tree Dead? No, actually, it is a Larix sibirica or Siberian Larch, which is a deciduous pine tree—that is, it loses its needles (more correctly called leaves) in the fall and sprouts new ones in the spring. See it on the east end of PlantAsia. Other examples of deciduous conifers in the Gardens include the Dawn Redwood (Metasequoia glyptostroboides) found in Plantasia, several Cypress trees (Taxodium spp.), and a number of other Larch throughout the Gardens.

• Perspective: We are lucky in our Conservatory to be able to look at the plants not only from the level of the forest floor, but also from within the canopy, and indeed from above it. The usefulness of these varied perspectives is particularly clear in the case of the Red Ginger, or Alpinia purpurata. 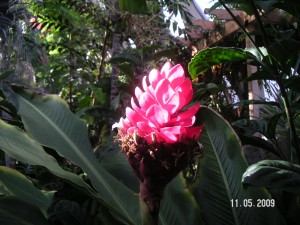 • Walking into the Conservatory at ground level, you barely notice this plant—all you see are a bunch of stalks amongst other stalks on your right. However, if you enter from the upper mezzanine, you are treated to stunning red flowers perched just about at eye level, waiting to be admired. Alpinias are members of the ginger family, and in addition to having an edible and medicinal rhizome, many have beautiful and unusual flowers. We have a number of gingers in the Conservatory, including Alpinia ‘Singapore Gold’ (see below). 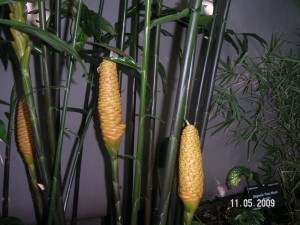