March 29, 2012 | John Murgel, Horticulturist
At first glance it seems obvious that plants age right along with everything else on planet earth.  Everyone can recognize an old tree. But is ageing really the same as being weather-worn? Compared to human ageing, where progressive deterioration of physiological function eventually leads to death, plants can hardly be said to age at all.
Plants are organized differently than animals. Usually animals complete all their major structures and organs while in the embryonic stage and (usually) have limited capacity to regenerate lost parts. Plants on the other hand develop only the simplest approximations of adult plant form while embryonic, completing their development sequentially throughout their life thanks to their meristems, clusters of permanently juvenile cells at all growing tips. Plants are also modular, that is, the entire organism is made up of a series of repeated parts, none of which is individually essential to the life of the whole. In other words, everything is disposable and designed to be disposed of. Modularity and programmed cell death allow plants to develop into the myriad forms with which we are familiar.  Because of their cell walls, plant cells are fixed in place within the organism—animal cells, which lack cell walls, are free to travel about and rearrange themselves, allowing necessary channels and holes to form during development. Because plant cells can’t move, they die in order to get out of the way of progress. This is dramatically evident in trees, where a film of living tissue clings to the hulk of deceased predecessors that we call “wood”. 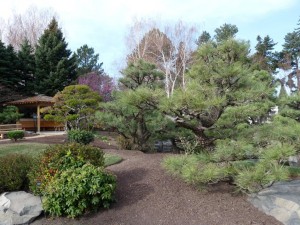 Many scientific studies have shown that as trees grow larger they show decreases in photosynthesis, growth, and reproductive output, and increased evidence of stress at the leaf-level. But is this ageing? Scientists have hypothesized that it is sheer size, rather than age, that causes these symptoms. As the amount of leaf tissue relative to the volume of nutrient-conducting tissue increases, the competition for water and vital chemicals among leaves stiffens, causing declines in photosynthesis and increased stress. Grafted or rooted twigs of very old trees do not continue their downward slide but instead return to a state of juvenility. A similar struggle for resources may be at work in annuals and monocarpic (reproducing only once) species. As flowers give way to fruit and developing seed they demand all the resources the plant can spare. Gardeners are well aware of this and prolong the life of summer annuals by removing spent flowers before the seeds can begin to ripen.

Even so, not all plant species respond to “dead-heading.” The life span of annuals and monocarpic species is more complex than simple balance-sheet accounting among developmental processes. The broad spectrum of life spans among plants points to an element of genetic control within species. Few experiments have been designed to test this in plants, so the mechanism of genetic control of ageing remains unclear. What has been shown, though, as that the telomeres, sections of DNA which act as chromosome-protecting caps (as well as life-time clocks) in animals, do not function in the same way in plants.
Genetic damage sustained by meristems is also sometimes blamed for plant decline and death. It’s true that the rapid rates of cell division and exposure to the elements make mutations in meristems a common occurrence. “Sports” of different appearance on a shrub or tree are an example of the effects of a meristematic mutation. Can harmful mutations accumulating in meristems be the cause of plant ageing? Probably not, or at least, not entirely. Most plants have very robust mechanisms to deal with DNA damage and replication mistakes—one study found no difference in the number of mutations among Pinus longaeva spanning 23 to 4,713 years of age.
Plants change with time, but in ways that are unrecognizable compared to animal ageing. Plants resist and avoid ageing—most of their tissues go through a programmed (and usually reversible) senescence as the completion of their function rather than as an unavoidable fate, and a wave of new tissue produced at meristems stays one step ahead of the wave of cell death following it. As one scientist put it, plants age, but they “are organized so that they are not there when it happens.”
Category:
York Street, Conservation & Ecology, Rocky Mountain Gardening
Tags:
Plant age, senescence, telomere