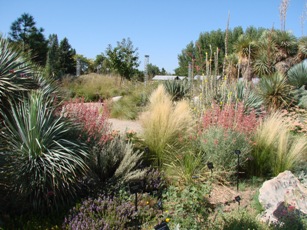 We think of gardens as a kind of craft or art, aesthetic objects designed for pleasure, contemplation or perhaps for the stimulation of the senses. It could also be argued that the garden is a laboratory where the gardener grapples with chemistry, ecology and the complex workings of biology. After all, it was an apple falling in a garden that set in motion the entire legacy of Newtonian physics. Few laboratories in the world have been as fertile or productive as Darwin’s own garden. Charles Darwin was an enthusiastic and accomplished horticulturist as well as the father of evolution. Many of his books and papers were seemingly derived largely from his observations of the laboratory of his garden: "The Variation of Animals and Plants under Domestication," this papers on orchids, carnivorous plants, earthworms were all inspired by what he observed in his garden and conservatory. I wonder if his evolutionary theory might not have been abetted by the dynamics of a garden.

In The Undaunted Garden, Lauren Springer Ogden describes the "Darwinian" struggle that takes place over time as plants better suited to her conditions gradually prevail. Every gardener realizes that gardens evolve dramatically over time, and that the shifting processes at work in a garden parallel the processes described in the Origin of Species.

Alas, the best examples known to everyone are weeds, that are constantly evolving and seemingly even THINKING about ways to elude us. Every seasoned gardener can tell stories about the tricky ways that weeds have of outwitting us and shedding their seed before they’re noticed. I suspect Darwin might have had some words to say about this!

As you stroll through Denver Botanic Gardens, you may walk past insectivorous plants like Venus flytraps and pitcher plants that fascinated Darwin. The earthworms lurking underfoot were not too lowly for his attention. And he was intrigued by orchids and the fascinating variety of pollination that is everywhere evident.

If you think about it, you will identify intently with this great thinker who could translate the gentle observations that we all make from day to day in our gardens into the powerful magic of scientific hypothesis that transforms and revolutionizes human civilization down to our the present day.