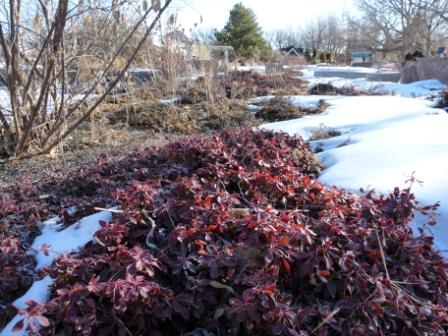 Winter is a great time to notice details about plants.  For one thing, fewer plants are around, so you can afford to spend some time taking a closer look at those that are.  Now that plants are peeking through the snow again (but while the white backdrop still persists here and there) its easy to notice some fairly striking color differences in the leaves that still persist.

Two weeks ago I discussed herbaceous evergreens; I’ll stick to a similar topic today:  “ever-reds”.  Everyone appreciates reds, yellows, and oranges of autumn, but some plants delay their color show until winter is in full swing.  Also unlike red leaves of autumn which are essentially in their death throes, the winter reds (usually) green up again in the spring.  And while scientists have explained why leaves turn yellow, orange, and red in the fall (basically, the colors are always there, but the green of chlorophyll overwhelms them until it gets broken down in the fall), the reasons for winter reddening are a matter of some debate.  The most popular and most widely researched explanation is that red pigments protect evergreen plants from excess light in the winter (photoprotection), but the pigments might also serve to regulate winter temperatures, to protect plants from freezing, or to camouflage plants from predators. 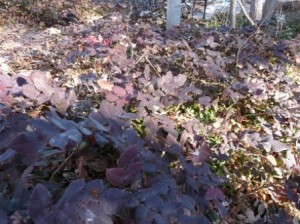 The classic explanation of winter reddening is that red pigments protect plants from the effects of too much light.  This makes sense in observation--plants in full sun in the winter often turn red, while shaded members of the same species stay green.  It’s initially perhaps a bit of a stretch to imagine that plants can suffer from excess light—after all, we’re taught from a young age that plants adore the sunshine. 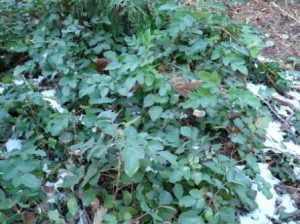 But especially in winter, when the air is cold and dry and physiological processes in most plants have slowed down, light energy can wreak havoc inside plant cells, overloading the machinery of photosynthesis and damaging essential proteins.  Red pigments are known to act as antioxidants in vitro, absorbing the excess energy and harmlessly dissipating it away.  Simple red pigments (known as anthocyanins) might also play an especially important role in cold temperatures, when more complex enzymatic systems for energy dissipation are slowed.  These functions have yet to be proven in the field, though, and certain problems do exist, notably the spatial separation of the anthocyanins from the chloroplast, where light-induced, cell-damaging molecules are formed.  If red pigments aren’t directly functioning as anti-oxidants, they may be acting more like a parasol inside the leaf--physically shading chloroplasts to prevent “sunburn.”

Temperature regulation is another proposed hypothesis to explain winter reddening.  Because red leaves absorb more heat energy than green, red coloration in leaves might help the plant stay warm.  This hypothesis is largely untested—a few studies have shown no thermal advantage of red over green leaves, but they were conducted at near to, but, significantly, above freezing.  Below 32F, extra warmth garnered by red coloring could make a world of difference.

Red pigments might also play a direct anti-freeze role.  Pigment production is correlated with cold stress in plants and some of them might help to keep ice crystals from forming inside cells.  Not all red pigments are soluble in water, though, so this theory can’t explain the presence of all the pigments winter-red plants produce.

A more recent hypothesis suggests that winter-red plants are actually effectively hiding from herbivores, as most insects and mammals lack red receptors in their eyes.  In the summer, when more forage is available, camouflage would become less necessary and could be jettisoned (presumably for its expense).  Oftentimes new shoots and buds are reddish in color as well, which could support the idea that red coloring is an attempt to become less visible on the part of the plant.  Even so, the plant could just be protecting its sensitive new tissues from light damage.

Finally, it’s important to recognize that these hypotheses are not mutually exclusive; more than one factor could be turning plants red in the winter time, and different factors could be at work in different plants.  It’s also clear that if winter reddening is solving a problem for some plants, other plants have dealt with that problem in still other ways, as they happily remain green all winter long with great success (remember cheeseweed from Feb. 8?).  Scientists have some work to do before we understand everything that plants are up to, but at this time of year, it’s comforting to know that plants are up to anything at all.