August and September bring the heyday of many plants of the aster family (Asteraceae). Asters, chrysanthemums, black- and brown-eyed susans, sunflowers, and others grace the landscape with late summer color. Along with them, though, comes a pernicious illness with a mysterious cause:  Aster Yellows.
Plants infected with aster yellows can show a variety of symptoms, from yellowing and reddening of foliage (hence the name), greening of flowers, dwarfing, extremely bushy appearance, and root malformations.  In addition to composite flowers like asters, carrots and onions can also be infected by aster yellows.

So what actually causes aster yellows?  The disease is caused by a strain of microorganism known as a phytoplasma.  Phytoplasmas were discovered in 1967 and were taxonomically placed are members of class Mollicutes, which is composed of bacteria-like single-celled organisms without cell walls. Another group of Mollicutes, mycoplasmas, cause disease in humans and animals, most notably the infection known as “walking pneumonia.”

Phytoplasmas are not all that close to mycoplasmas genetically, and they’re not known to cause disease in people or animals.  They do take a heavy toll on economically important plants, though, distorting blossoms and imparting unpleasant flavors to edible crops. 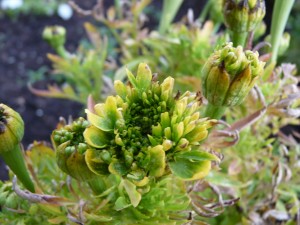 Phytoplasmas are spread from plant to plant by leafhoppers—insects that suck plant juices through a straw-like mouthpart. When disturbed they hop short distances, giving them their common name. Phytoplasmas that are ingested by leafhoppers multiply inside the body of the insect (lasting anywhere from a few days to a month, depending on the weather). After the incubation period, the leaf hopper can transmit the pathogen whenever it stops to feed.  Within 24 hours of being deposited by an infected leafhopper, phytoplasmas can be found throughout plant tissues.

If you suspect that you have aster yellows, several measures can be taken to limit the disease’s effects (though none will eliminate the disease entirely). First, try to eliminate perennial hosts of aster yellows from the area.

These include thistles, dandelions, wild carrot, plantain, and field daisies. If control of weeds isn’t possible, try to keep susceptible plants away from them or consider discontinuing their use altogether. It’s also helpful to try to control leafhoppers early in the season to prevent their populations from becoming too large.