One of my earliest science class memories (and maybe one of yours, too) is learning that people and other animals “breathe oxygen” and plants “breathe carbon dioxide”.  I carried this gem all the way to AP biology in high school, when things got complicated.  As it turns out, plants need and use oxygen for all the same things that we do, and they exhale carbon dioxide to boot!

So what’s going on here?  And why do we need to breathe in the first place?  It all comes down to what those two gases—oxygen and carbon dioxide—are actually up to inside our (or plants’) bodies.

We usually think of eating and breathing as two essential (and separate) processes for staying alive, but they are actually part of the same program. When we eat something, its component sugar molecules make their way into our blood stream and cells where they are broken down, a process that releases energy that can be used to do all of the work that keeps cells (and thus entire organisms) alive.  Sugar molecules are composed of carbon, oxygen, and hydrogen atoms—when they are broken down in cells they come apart as a few molecules of carbon dioxide and hydrogen that is quickly snapped up by oxygen molecules (that we breathed in) to produce water.  The whole process of breaking down sugar and harvesting the energy produced is officially called “cellular respiration,” or sometimes just “respiration”.  The waste product--carbon dioxide--makes its way into our blood and out through the lungs.  (When you see “before” and “after” weight loss program photos, it’s fun to realize that all those pounds left through the lungs as carbon dioxide—at roughly “6 followed by 24 zeroes” molecules per pound).

Plants get their energy in the same way that animals do.  They break down sugar molecules in their cells and harvest the energy that results from the process.  Animals and plants differ in how they get the sugar in the first place.  Plants lack digestive systems and the ability to eat as animals do; instead they produce their own food directly inside their cells using photosynthesis.  As you might have imagined, photosynthesis is opposite of respiration—plants use energy from the sun, water, and carbon dioxide to actually build new sugar molecules.  These molecules are transported through out the plant to be immediately used again or for long-term storage, usually in roots.

In summer, plants produce enough sugars by photosynthesizing to both feed themselves and to “put up stores” for hard times.  During the winter, most plants are respiring more than they are photosynthesizing, i.e. breathing more oxygen than carbon dioxide.  With no leaves and/or cold temperatures, photosynthesis can’t occur, so the plants live off stored sugars (just like hibernating animals live off stored food reserves).  At this time of year, the entire northern hemisphere is thought of as a “net carbon source.”  Almost all plants and all animals are respiring away, and the concentration of carbon dioxide in the atmosphere gradually increases.  As spring approaches, plants need a lot of energy to build new leaves and stems, so they push stored sugar into their growing points to feed the construction boom, causing a spike in carbon dioxide output.  This big push of carbohydrates is also what makes this time of year maple syrup season—trees pushing sugar-rich water up their stems can be (and are) routinely robbed by all sorts of unsavory (at least from the tree’s perspective) characters. 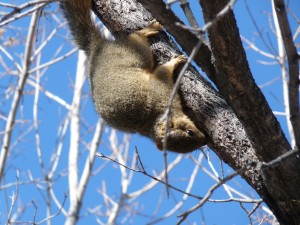 Once plants have leaves again, the balance between respiration and photosynthesis swings around, and the ecosystem will become a “carbon dioxide sink.”  During the growing season more oxygen is produced than used, at least until autumn brings an end to photosynthesis and starts the cycle over again.